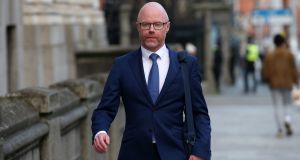 Minister for Health Stephen Donnelly arrives at Government Buidings on Friday afternoon for the Cabinet meeting to discuss easing Level 5 Covid-19 restrictions ahead of the Christmas period. Photograph: Laura Hutton

As Ireland gets ready to reopen for business next week, there is little reason to think a third surge of Covid-19 can be avoided next year.

This is the reality of “living with the virus”, when transmission has not been reduced to manageable levels and where the finer techniques for hunting it down have not been mastered.

Perhaps the best we can hope for is that the next surge in cases will not occur until February, near the end of the winter.

Six weeks of Level 5 restrictions have left us with a mixed picture. Daily case numbers have been cut by 75 per cent, from a peak of about 1,200 to under 300 by early next week. This is well short of the 50-100 a day targeted by public health officials.

The number of Covid-19 cases in hospital and intensive care has barely changed, neither taking off as in the first surge nor properly ebbing away. The rate at which patients have been hospitalised in this surge is one-quarter of what it was in the spring.

Because we moved early and relatively hard, Ireland is currently best-in-class in Europe. Only Finland and Cyprus have a lower incidence of the virus. Over the last fortnight, for every Covid-19 patient that died in Ireland, more than two died in Sweden relative to population. In Germany, that figure is three; in the UK, almost seven; in Italy, 11.

So we have saved lives and slashed our case numbers, thereby allowing the health service to get on with normal business, while keeping our schools open.

These are palpable achievements, but there is little sense of celebration. They have to be balanced by the ill-effects of restrictions on people’s health and the economy.

The immense cost of lockdown only emerges in snippets. Three examples from Thursday alone: Level 5 has cost the exchequer at least €1.5 billion in State supports and lost taxes; up to 2,000 cancers may have been “lost” this year due to patients not presenting; and one GP told me that for the first time in his career he has been treating patients with fractures because they were too afraid to go to hospital.

Tánaiste Leo Varadkar has admitted another lockdown may be needed in the New Year to offset the freedoms being granted over Christmas. He vowed it would be short, but we’ve heard that one before.

So far, the effectiveness and safety of the most advanced vaccines under development have been measured in days, when their performance over many months needs to be assessed.

Some say lockdowns don’t work; others believe that they save us from worse outcomes. Our second lockdown failed in one central objective, by not getting case numbers down to a level that would facilitate rapid contact tracing. Despite recruitment, public health units will be hard pressed to effectively follow up each of the 300 files landing on their desk every day.

Living with the virus also means improving people’s fitness and immunity levels, and dialling down fear levels in society

And despite the urgency of the situation, and that we’ve been through this before, the system moves agonisingly slowly. Retrospective tracing of contacts was called for months ago, yet all we’ve got so far is a pilot study. Antigen testing is cheap and fast but no role has been found for it in our system.

We order review after review, often repeating the work of experts in other countries. The big ship of State turns around slowly, when what’s needed is nimbleness and an ability to adapt and innovate, and to move on quickly from mistakes.

Living with the virus also means improving people’s fitness and immunity levels, and dialling down fear levels in society. It means providing extra supports to the most vulnerable and removing the psychological and economic issues that might stop a person getting tested, or lead them to turn up for work when they have symptoms.

With no excess deaths in Ireland since May, a sense of proportion is needed. Seasonal factors are helping to drive up cases at the moment, and will ultimately push them down again. The second wave was nowhere near as bad as the first, and the next one should be more manageable still.