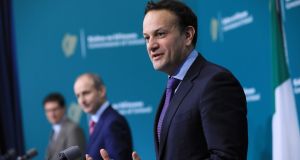 Tánaiste Leo Varadkar said many people had experienced a “rotten year” in 2020. He was speaking at a press conference at Government Buildings on Friday. Photograph: Julien Behal Photography/PA Wire

Pubs that have been told to remain closed for Christmas will be given an additional €15,000 in State supports.

So-called wet pubs have been told they cannot reopen but business owners will be given three double payments under the Covid Restrictions Support Scheme (CRSS).

That scheme, announced in the budget, provides businesses hit by restrictions with grants of up to €5,000 a week. Pubs will now receive an extra €15,000 under the Government’s proposed support package although they will not receive this payment until December 21st.

Tánaiste Leo Varadkar said that over the next four weeks some 150,000 people will return to work after the Government eased restrictions across the economy from next week onwards.

Shops, gyms, hairdressers, churches and museums will reopen from Tuesday while restaurants and gastropubs with their own kitchens will reopen next Friday.

Mr Varadkar said the extra payment is a “small gesture.”

“I know pubs never thought they would be closed this long and one thing I will do over the next couple of weeks is sit down with the vintners and nightclubs owners and talk about what 2021 will look like, because 2021 will be a better year.”

Mr Varadkar said many people had experienced a “rotten year” in 2020.

In its letter to Government, the State’s public health team warned that Ireland is in a “precarious position” and that early action may have to be taken if Covid-19 figures move in the wrong direction again.

Reacting to this, Taoiseach Micheál Martin said the Government would look at a potentially new set of restrictions in the New Year. He indicated some sectors may not have to close again and that he would monitor the data from non-essential retail.

“We will not be slow to act again. If anything we have learned that by moving earlier than most European countries we are in a much better place. We will look at this again in January. We will learn from research and data. You could be looking at a different type of restrictions, if we had to move into more restrictions. Just as in Level 5 we had a different set of restrictions than we had in phase one of lockdown in the spring. Construction stayed open, schools stayed open. This is an evolving journey.”

“We want this to be sustainable. We will review this on the 6th of January in terms of new measures that we might have to take or indeed some of these reopenings could be sustainable, some of these sectors might not have to close again. If you take non-essential retail, we will watch that very carefully because there is more data coming in all the time.”

Meanwhile the Green Party leader Eamon Ryan said the Government was urging Irish people abroad not to return home this Christmas, but he said there was an understanding that some people may have to travel in order to look after parents or in order to see their children.