Rising flood waters have led to parts of Cork city centre being flooded with some business owners having to bail out waters after the River Lee burst its banks. Video: The Irish Examiner & Richard Jacob/Idaho Cafe 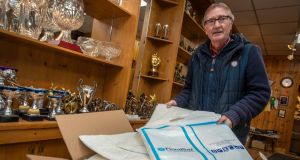 The difference between success and failure on the pitch can often come down to fine margins as five-time All-Ireland winning Cork hurler Gerald McCarthy well knows.

But McCarthy knows that success in business can also come down to fine margins particularly if your business is in Cork city centre where the risk of flooding is a perennial threat.

The only man to captain his county to senior and under-21 All-Ireland hurling success in the one year, McCarthy wears his 75 years lightly as he speaks about his lucky escape from Tuesday’s flood.

A fourth generation stone cutter who once worked for sculptor Seamus Murphy, carving the lettering on headstones, McCarthy has run his sports trophy business on Lower Prince Street in Cork city centre since 1978.

That was the year Cork completed a three in a row and behind the counter is a photo of legendary Cork hurler Christy Ring performing the honours and officially opening McCarthy’s shop just a month or two before he died.

A lot of water has flown under the bridge since then but it was flowing onto the streets on Tuesday and almost into McCarthy’s shop.

“You see that step there – it was up to the lip of that yesterday morning,” said McCarthy, nodding to the upper of two steps leading into his shop which saved him from the mopping up operation that he has faced many times in the past.

“We weren’t so lucky back in 2014,” he says, as he points out a cupboard the water reached six years ago.

It’s been like this as long as he can remember, recalling coming into town as a 12-year-old with pals from the Bandon Road, taking off his shoes and socks and rolling up his trouser legs to wade down a flooded Oliver Plunkett Street.

He is reminded of what he said in 2014 to The Irish Times: “You know, the flood comes and there’s this immediate impact but then after all the mopping up and cleaning up is done, it’s all forgotten about again very quickly . . . But next year or the year after, it will happen again and nothing seems to be done and that’s very frustrating – for the commercial centre of the city to be decimated like this every year or every couple of years, it’s just not on.

“That was six years ago but what has changed? It’s the same old story – I know there’ve been court cases and appeals but they need to grab the situation and do something.”

Conscious that he was lucky to escape Tuesday’s inundation, McCarthy points out that winter has yet to come and like other traders in the area he is worried about the future.

“We got away by the skin of our teeth yesterday but you just don’t know when it’s going to happen – and it’s not just the high tide and the amount of rain that’s falling – so much depends on the direction of the wind.

“If the wind is blowing up the river, no matter what kind of a tide you have, you could be in trouble because it’s pushing the water up into the city and blocking the water coming down and the next thing you know, you’re flooded again.”