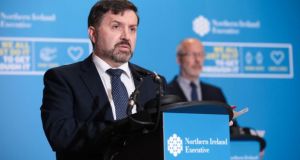 Northern Ireland’s health minister Robin Swann is self-isolating after coming into contact with someone with Covid-19.

The North’s Department of Health said Mr Swann received an exposure notification on Wednesday evening from the StopCovid NI proximity app, informing him that he had come in contact with another user who had tested positive.

A statement from the department said he will fulfil his ministerial responsibilities from home for 14 days.

Earlier, DUP agriculture Minister Edwin Poots had no intention of offending his Catholic friends and neighbours when he commented that Covid-19 rates were far higher in nationalist than unionist areas, he said on Wednesday.

Over recent days Mr Poots has been under pressure to apologise for his comments that there is higher transmission of the virus, at a rate of six to one, in nationalist than in unionist areas.

He was accused by Sinn Féin of seeking to “sectarianise” the coronavirus crisis while the North’s chief medical officer Dr Michael McBride said there was no evidence of a link between infection rates and political or religions identity.

Mr Poots in his original comments said “a lot of the problems started” after the funeral of leading republican Bobby Storey in west Belfast in June.

“People in that community saw the breaking of the rules. That is why there is a difference between nationalist and unionist areas, and the difference is around six to one,” said Mr Poots.

On Wednesday afternoon, amid continuing controversy over these remarks, Mr Poots issued a statement offering clarification but not an apology.

He said that over recent days “Sinn Féin and others have tried to distort and twist” the comments he made.

“At no time did I attribute the spread of Covid-19 to religion. It is deeply regrettable that such a narrative has been created,” he said.

“It is obvious such spread is related to behavioural issues, nothing more nothing less. I cherish my Catholic friends and neighbours. I would never intentionally use words that would cause them offence.”

“Covid-19 is spread by bad behaviour such as that exemplified at the Bobby Storey funeral,” said Mr Poots.

His leader and First Minister Arlene Foster said it was right Mr Poots clarified his comments.

“As far as I’m concerned that’s an end of the matter,” she said.

“Of course, the virus doesn’t discriminate against people on the basis of their religion or their politics or where they live.”

The Department of Health in its daily bulletin on Wednesday afternoon reported 1,039 new cases of coronavirus, taking the total to 29,992. There were five more deaths, bringing the total to 629.

There are now 289 patients being treated for Covid in Northern Ireland hospitals with 32 in intensive care units and 26 on ventilators.

The incidence of the virus in the worst hit area of Northern Ireland, Derry and Strabane, continues to drop. Over the past seven days the area experienced 670 cases per 100,000 of the population. The figure was 992 cases a week ago.

The North’s health Minister Robin Swann meanwhile said that “extremely difficult choices” had to be made when introducing restrictions.

He was responding to a row over an official scientific paper estimating that the closure of hairdressers and beauty salons could only reduce the virus’s R or reproduction number by 0.05. It also estimated that the closure of pubs and restaurants could decrease it by between 0.1 to 0.2.

Health officials said the four-week period of restrictions imposed last week is designed to bring the R number below one in order to see a decline in the incidence of the virus. It is estimated to be now around 1.4.

This prompted former DUP Minister and chief executive of Belfast Chamber of Trade Simon Hamilton to tweet, “Why did ministers close hospitality and close contact retail when they knew it would have such a low impact on the R number, a high impact (on) incomes and a disproportionate effect on the poor and women?”

Mr Swann and the North’s chief scientific officer Professor Ian Young defended the decision. “An alternative to the Executive’s time-limited, targeted approach to restrictions would be a return to full lockdown. I don’t believe any of us want that,” said the Minister.