Des Bishop apologises to Traveller community for comments in interview 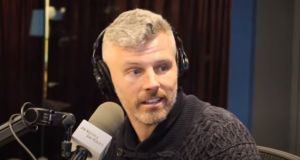 A screengrab from the Sirius XM interview with Des Bishop. Image: Youtube

Comedian Des Bishop has apologised to the Traveller community for comments he made in 2018 when he described the community as inbred and violent.

Earlier, Travellers’ groups called for an apology over an interview with US radio station Sirius XM, on which Bishop said Travellers “drink a lot”, “get violent when they drink”, “are sort of feudal” and “are all on social welfare”.

On Wednesday afternoon, Bishop posted an apology on Twitter.

“I am writing this to apologise to the Traveller community for comments I made on a radio show in the US a couple of years ago.

“I especially apologise to the community in Tuam who were so welcoming to me 15 years ago when we were filming Joy in the Hood. The experience was so positive for me which I am sure makes it even more hurtful for them to hear such negative comments about their community uttered by someone who they treated so well.

“It is of no consolation that I am so disappointed in myself because I don’t believe in these stereotypes that I spoke so freely about on the show.

“I have always wanted to be someone who helped to end prejudice against travellers in Ireland but I clearly have had a blind spot to my own prejudice.”

Bishop gave a wide-ranging interview on the Jim and Sam Show, a weekday morning show on the Manhattan-based Sirius XM, in March 2018. The satellite channel has 34 million subscribers. A YouTube video of the interview has been shared widely in recent weeks by the community.

Early in the 40-minute interview Bishop is asked by hosts Jim Norton and Sam Roberts about the “those bare-knuckle fighters”.

Responding, Bishop says they are “Travellers” and says: “The Travellers are like, they are very discriminated against”.

He tells how he “lived with them for a month” in Tuam, Co Galway, for a documentary on stand-up comedy “in bad areas”.

“They were great. They were great fun. but you know, like all marginalised, disadvantaged groups they have some social problems.”

Asked: “Did they drink?” he said: “They drink a lot. They get violent when they drink. They’re sort of feudal, so they have a lot of feuds. They are kind of tribal I should say, so they have a lot of feuds so when families turn against each other, it can be quite bloody and violent. But not so much with guns, but with axes and machetes and so on.”

Describing the community as “rough” and “paranoid”, he said “there is a lot of inbreeding”.

At another point Bishop says he “always sticks up for” Travellers, adding they are “hated” by the Irish, calling this “irrational” and “classic racism”.

The interview re-emerged after being posted by Traveller comedian Martin Beanz Warde, with the comment: “I’m asking him to apologise to my community publicly. No cancelling or blacklisting, just an opportunity to learn and grow.”

After Bishop posted his apology, Mr Warde said he accepted it.

Before the apology, Bernard Joyce, director of the Irish Traveller Movement, described Bishop’s comments as “shocking, degrading and racist” adding they caused hurt both then and now “in the community which is unacceptable. An unreserved apology to Travellers who experience widespread racism would go some way towards doing the right thing.”

He said: “Of course they are racist and of course he should apologise. There are some Travellers though, working in the arts, who inadvertently cause hurt also when they use stereotypes of their own community.”

Sirius XM did not respond to The Irish Times.