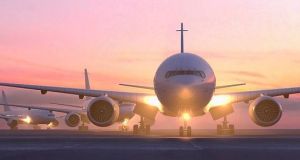 The EU “traffic light” system for providing Covid-19 testing at airports will come into force in Ireland on Sunday, November 8th, Minister for International Transport Hildegarde Naughton has said.

The traffic light system provides walk-through entry to people whose country of origin is deemed to be “green” or a low risk of Covid-19 infection, with testing, isolation and quarantine among other measures for people arriving from high-risk areas.

The scheme also provides for travellers from “amber” or “red” list countries to take recognised pre-travel Covid-19 tests in their country of departure. If negative the traveller may carry a Covid-19 clearance certificate with them, so avoiding compulsory isolation at their destination.

The rating of each country is to be compiled by the European Centre for Disease Prevention and Control (ECDC) in Stockholm, Sweden. It will publish a weekly map of the EU on its website on Fridays showing the different colour-coded categories of participating countries. The site already offers an overview of the travel regulations for each of the EU’s 27 member states.

Ms Naughton told the Oireachtas Committee on Transport the decision to join the EU scheme was taken at Tuesday’s Cabinet meeting.

She said the traffic light scheme was based on recognised testing “validated” in the traveller’s country of departure.

Participation among the EU 27 and its associated states, including Norway and Iceland, would be up to individual countries.

Ms Naughten said it was likely the recognised test would be the one know as the PCR (polymerise chain reaction) test undertaken by a primary care practitioner some days before travel.

There were, she said, more rapid tests such as the “antigen” and “lamp” tests but these would need to be validated and recognised.

Ms Naughton said the Government had set up a high-level team spanning the Departments of Transport, Health, Foreign Affairs and Business to oversee the introduction of the traffic lights scheme and the reopening of a “safe aviation sector”.

She said this team was already examining rapid alternatives to the PCR test. However, she warned the PCR test was the “gold standard”, and any other test would have to be recognised in other states.

The aim, she said, was to get the aviation sector working in a way that was as safe as possible for passengers to fly and restore confidence in the industry. “Every single country is grappling with this,” she told the committee.

However Labour TD Duncan Smith said he did not believe every country was “grappling” to the same extent, as some countries had already introduced testing at airports.

He noted that the committee would next week hear evidence from airport operators in Rome, Italy, about airport testing in place there.

Speaking to The Irish Times after the meeting, committee chairman Kieran O’Donnell said next week’s committee sessions would be spread over several days and include many aspects of the aviations sector.

He referred to the Health Information and Quality Authority (Hiqa) assessment of alternative tests to detect the coronavirus published on Wednesday and said it offered hope of a rapid test being used, possibly backed up with occasional confirmation by the PCR tests.

He noted Hiqa advised that the introduction of validated rapid testing in Ireland “should now be considered to enhance Covid-19 prevention and control”.

The EU traffic light system provides for the following:

* Persons arriving from green list locations can enter the State without the requirement to restrict movement or undergo testing for Covid-19;

* The default for persons arriving from orange or red locations should be to restrict movement for 14 days, with the exception of those exempted;

* The requirement on those arriving from orange locations to restrict movement can be set aside if they have negative test result of an appropriate pre-departure test.