Fianna Fáil backed into corner by Sinn Féin over O’Sullivan 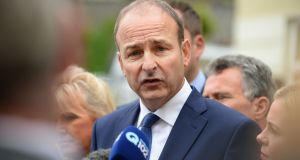 The most benign interpretation of the Fianna Fáil manoeuvrings over Nóirín O’Sullivan’s ongoing tenure as Garda Commissioner is that Micheál Martin is attempting to manage his front bench and backbenchers.

The unflattering interpretation is that his indecision about what position to take on O’Sullivan is borne of an anxiety about what Sinn Féin will do.

When the controversy over the million breath tests that never happened was at its height, Martin called on O’Sullivan to consider her position.

With that statement, he immediately backed his party into a corner. They are now in the position of being unable to express confidence in O’Sullivan while not wanting to support a Sinn Féin motion of no confidence in her in the Dáil.

The reasons, as outlined by justice spokesman Jim O’Callaghan and others, are that only the Cabinet and Policing Authority can force a commissioner from office and that it would be inappropriate for parliament to try and force a senior public servant to resign.

Yet Fianna Fáil flirted with such a prospect in recent days as it considered adopting the language in a Labour motion for its own proposals on Garda reform, which are partly an effort to head the Sinn Féin motion off at the pass.

Martin discussed supporting that, working with Labour leader Brendan Howlin earlier this week, it is understood. It seems, however, that Fianna Fáil is now moving back from that position, with indications from within last night that they will not be seeking resignations from An Garda Síochána.

Perhaps Martin’s brief flirtation with Labour’s idea was to keep his senior TDs happy before returning to his original plan of calling for substantial Garda reform.

At the weekly meeting of the Fianna Fáil front bench this week, TDs Timmy Dooley, Michael McGrath, Dara Calleary and Billy Kelleher expressed a view that O’Sullivan should remain in office.

One frontbencher yesterday claimed the party’s motion calling for reform would not call on O’Sullivan to go, or even touch on the idea of confidence in her or her senior officers, would be just enough to encourage the commissioner to resign.

There is no chance of that happening. O’Sullivan has already faced down pressure from numerous quarters – including Cabinet Ministers – calling on her to go.

“We are completely backed into a corner, and it’s Micheál who put us there,” said one party TD of Fianna Fáil’s predicament. Should he become taoiseach, Martin will be in an even tighter spot.

O’Sullivan is just over two years into a seven-year contract. She clearly wants to stay put, and nobody wants to push her.

As of now, the odds favour Martin becoming taoiseach, with O’Callaghan taking up a berth in the Department of Justice, sometime in the coming years.

Will it be credible for both to go into a general election promising to sack a Garda Commissioner as one of their first acts of office? Unless their position on O’Sullivan is clarified before then, that is what they face.

The obvious way out is to support a Dáil motion calling for radical reform of the policing apparatus – An Garda Síochána, the Policing Authority and others – and say that O’Sullivan will have the confidence of the party if she adopts the proposals.

If that is to happen, Fianna Fáil should adopt a conclusive position on O’Sullivan – by either supporting her or definitively saying it will sack her upon taking office – to regain credibility.