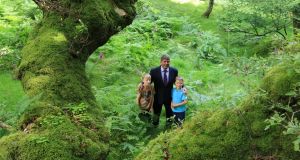 Minister of State for Agriculture Andrew Doyle: “We should accept ivy as part of the community of plants found on trees.’’ Photograph Nick Bradshaw

A national tree survey to assess the impact of ivy on tree growth has been ruled out by Minister of State for Agriculture Andrew Doyle.

He told the Seanad it would be an extremely costly exercise, given that the current health and vitality of trees in Ireland’s forests were generally good.

“Even if Ireland were to instigate a strategy to remove or limit the growing of ivy, it would have consequences for biodiversity and reduce shelter for other species,’’ Mr Doyle added.

He said controlling ivy by removing a portion of the stem of the plant by manual cutting would have little impact as new plants would regenerate.

“We should accept ivy as part of the community of plants found on trees,’’ he added.

Mr Doyle was replying to Fianna Fáil Senator Brian Ó Domhnaill who raised the “burdensome problem of wild ivy attaching itself to trees’’.

He said the ivy, which was sometimes referred to as “English ivy’’, was causing damage to the native tree population, both in public amenity areas and in private property.

“It does not kill a tree, but the resulting activity after it has started to grow can kill the tree,’’ Mr Ó Domhnaill added.

“It creates competition for nutrients, water and sunlight.’’