Bruton aware of ‘concerns’ about agency dealing with abuse survivors

Minister tells Dáil Caranua has a difficult job to do 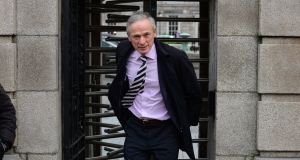 Minister for Education Richard Bruton has said he was aware of “concerns’’ raised about the statutory body Caranua.

The body was set up in 2012 to manage the €110 million pledged by religious congregations to enhance the lives of the survivors of childhood institutional abuse.

“It is vital that in all our dealings with victims of abuse they are dealt with in a sensitive, fair and compassionate manner,’’ Mr Bruton said.

The Minister was replying in the Dáil on Wednesday to Independent TD Catherine Connolly who asked if he could stand over reported comments by the body’s chief executive Mary Higgins.

Ms Connolly said the chief executive, who earns an annual salary of €87,000, had said “some applicants will never be happy and grievances suit a narrative’’.

Mr Bruton said the comments, as reported, were “unfortunate and could certainly be open to misinterpretation’’. He said he also recognised Caranua had a difficult job to do and, in its initial phase, had logistical difficulties which gave rise to genuine frustration for many people. Improvements had been made in the processes last year.

Ms Connolly said the name Caranua, or new friend, was singularly inappropriate. It was a misuse of the Irish language because survivors did not feel they had met a friend, she added.