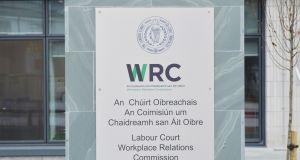 Workplace Relations Commission: found the nursing home instigated the disciplinary procedure to dismiss the nurse in advance of her reaching 12 months of service, as a result of her protected disclosure to Hiqa. Photograph: Alan Betson

A whistleblower who was sacked after making a protected disclosure to the Health Information and Quality Authority (Hiqa) over practices at a nursing home has been awarded two years’ salary (or €52,416) for her unfair dismissal.

In a ruling the Workplace Relations Commission found the nurse’s unfair dismissal in February 2016 was linked to her protected disclosure to Hiqa in October 2015.

The whistleblower made the protected disclosure after one incident where she found a resident “tied with a walking belt into an ordinary chair in her room with the door closed and in a very distressed state” on June 2nd, 2015 .

The whistleblower completed an incident report in the nursing home’s incident book, the patient file and the communications book.

However, soon after the nurse found that the entry on the incident in the communication book had been removed. She said that she was in disbelief.

Following the entry removal, the nurse perceived a marked change in attitude of management towards her and began to feel “frozen out”. She was left uninformed about policy changes and other relevant information that was communicated to other members of staff.

The nurse reported that, while on duty in September 2015, a colleague told her that a staff nurse – who was also the former owner and also mother of the current owners – told staff that the complainant “made mistakes” and carers “should be careful when on duty with her”.

No parties are named in the WRC report and it records that, in October 2015, the nurse reported being “verbally attacked” by the mother of the owners in full view of passers-by including other staff and family members of residents.

Due to the nurse’s ongoing concerns regarding practice in the nursing home and the lack of response or action taken regarding her concerns, she made contact with Hiqa. The nurse made a protected disclosure in a written submission to Hiqa on October 27th 2015.

Following this, Hiqa made an unannounced inspection on October 30th, 2015.

The nurse was requested by management to attend a disciplinary hearing on January 29th, 2016, and correspondence from management outlined several allegations made against her.

On February 4th, 2016, the nurse received correspondence from her employer notifying her that her employment had been “terminated”.

The nurse said the Hiqa report on the centre vindicated her protected disclosure. At the WRC, the nursing home denied the nurse’s dismissal was in any way linked to the complaint made by her to Hiqa, or the issues raised by the nurse.

The employer stated that the nurse’s dismissal for gross misconduct was solely based on serious and dangerous breaches of procedure made by her.

The employer stated that the first time it became aware that the nurse had made a complaint to Hiqa was when she told them she had by email, on February 5th, 2016.

The WRC adjudicator, Caroline McEnery, found the nursing home commenced and instigated the disciplinary procedure in an attempt to dismiss the nurse in advance of her reaching her 12 months of service with the company as a result of her protected disclosure to Hiqa.

Ms McEnery stated: “Based on all of the evidence presented, I find this dismissal is an unfair dismissal as the rules of natural justice were not followed and is clearly linked to the protected disclosure this employee made to Hiqa.”