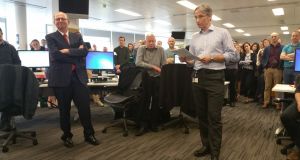 Paul O’Neill addresses newsroom staff after the announcement he is taking over from Kevin O’Sullivan (left) as editor. Photograph: Frank Miller

The independence and values of The Irish Times, allied with its creativity and news edge, would see it succeed into the future, outgoing editor Kevin O’Sullivan said on Wednesday.

O’Sullivan said that although his term had coincided with unprecedented turbulence and uncertainty for media businesses, The Irish Times had become the leading quality digital news media organisation in Ireland, while continuing to publish an agenda-setting newspaper.

After six years in the role, O’Sullivan told staff he was stepping down, before announcing the appointment of Paul O’Neill as the 14th editor of The Irish Times.

In his remarks O’Sullivan paid tribute to the commitment of staff. “In an unrelentingly challenging period, you have ensured our journalistic output was frequently in the public interest and enriched the lives of a growing number of readers.”

He said there were a great many positives to focus on. “Success is already evident in many ways, most notably in building an expanding digital subscriber business. We are now on track to serve almost 60,000 subscribers across digital and print,” he added.

“Among Irish media organisations we are best positioned to succeed in spite of obvious adversity. Sometimes as you battle in the fray it’s hard to believe that is the case, but I am utterly convinced it is true. I wouldn’t have said that five years ago.”

He said this point was illustrated by The Irish Times’s digital successes, including the new-look mobile site.

“Then there are the memorable long reads; the unique blend of podcasts, outstanding videos, investigative journalism that shows we have not lost our willingness to take a stance, often in the face of legal threats and those with deep pockets.

“And I’m convinced The Irish Times will continue to be a beacon among essential go-to Irish media organisations, serving those living on the island of Ireland and Irish people possessing a strong affinity with their country of origin and its democratic wellbeing who are scattered throughout the world.”

“I recall with relish those uplifting days of putting our distinct stamp on really big events . . . marked by brilliant writing, analysis and commentary in a variety of formats. There have been many days too when you open the print version of The Irish Times and quietly say, ‘This is a great newspaper.’ ”

It had become clearer to media businesses more recently where their revenues would come from, O’Sullivan noted. “It is through a diverse mix of revenue streams, with added-value journalism being the big calling card. I sense we will have a bright future, with a subscriber business at its core and a compelling personalised service smoothly delivered to smart readers.”