Last known CCTV footage of Trevor Deely recorded on Haddington Road, Dublin on 8th December 2000. Investigators have discovered new information in the the case of the 22-year-old. Deely disappeared following an office party over 16 years ago. 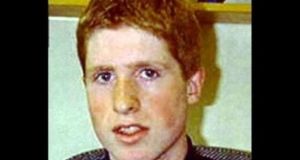 Trevor Deely: CCTV footage contains the last known sighting of him at 4.14am outside the then Bank of Ireland building on the corner of Baggot Street and Haddington Road 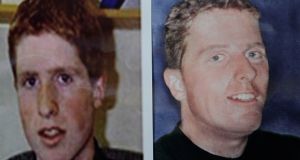 Photo fit of Trevor Deely (when he went missing, left) and how it is believed he may look like today.

The footage, which features a man talking to Dubliner Trevor Deely and somebody following him during the moments he was last recorded on camera, is due for release on Friday.

Gardaí believe it may lead to a crisis of conscience for anybody who has concealed information on the case for almost 16½ years. They are also hopeful if Mr Deely met with foul play that the person involved may be recognised from the images or come forward themselves.

“That’s a long shot, but a lot of time has passed since then and people’s circumstances and loyalties change,” said one Garda.“Somebody who may have known something then but was protecting a loved one or was in fear may not now be in that position. We will put it out there and we will see.”

Mr Deely’s family will be present with a number of senior Garda officers when the footage is released at a media briefing Friday morning. They will also distributes leaflets from 12.30pm to people on Haddington Road, Dublin, where the missing man was last seen alive. He was aged 22 at the time.

However, The Irish Times understands while the images have undergone an enhancement and production process in the UK they are not of the high quality that digital technology generates in the modern era almost two decades later.

The images were gathered from cameras in south Dublin’s inner city at the time Mr Deely vanished without trace after a work Christmas party in the early hours of December 8th, 2000.

One of four siblings from Naas, Co Kildare, he was living in an apartment at the Renoir complex on Serpentine Avenue, Ballsbridge, Dublin.

Gardaí opened a cold case review of the investigation last December. As part of it CCTV footage of Mr Deely walking home was sent to specialists in the UK for digital enhancement.

The CCTV footage contains the last known sighting of Mr Deely at 4.14am outside the then Bank of Ireland building on the corner of Baggot Street and Haddington Road. It shows him walking away from the camera holding an umbrella. No trace of him, or anything belonging to him, has ever been found.

However, in the enhanced CCTV images Garda sources say Mr Deely can be seen exchanging words or chatting with a man outside his place of work when he arrives. And when Mr Deely leaves his office a little later a man, possibly the same person, can be seen following him.