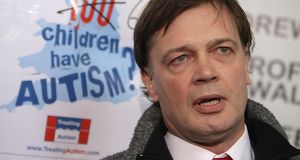 Andrew Wakefield: was struck from register because his anti-vaccination study had been discredited. Photograph: Peter Macdiarmid/Getty Images

Ireland’s anti-measles vaccination rate is below the 95 per cent required to avoid outbreaks, as concern grows about an ongoing upsurge in Romania that has spread to three other EU countries, the Dáil heard.

Fine Gael TD Kate O’Connell, a pharmacist, warned against emerging mistrust of scientific facts and said the Department of Health and the Dáil had to get the message out about the need for vaccination.

She said people were able to get loads of information “but there is a difference between getting information from Wikipedia and from a reputable agency”.

The Dublin Bay South TD warned that a doctor who had been struck off by the register of medical practitioners in the UK was due to visit Ireland “on tour with his anti-vaccination story”.

Ms O’Connell said Andrew Wakefield had been struck off “because his anti-vaccination study had been completely discredited”.

She had thought that “witch doctors and magic spells had gone out with the dark ages”.

She said “these anti-vaccine campaigners prey on vulnerable people and public concerns. Clearly no one wants to give a child anything that is perceived as doing harm” and it was important for public representatives and the Department of Health to get the message across about the dangers of non-vaccination for measles, a highly contagious infection.

Ms O’Connell said the Dáil often debated waiting lists and hospital bed waits “but if we have a measles outbreak in Ireland, we have something far more serious than capacity in our health service on our hands.

“Measles can cause deafness, blindness and death.”

No room for complacency

She said almost 50 cases were reported in May and June last year and this demonstrated the need to increase the MMR vaccination rate to 95 per cent.

She said immunisation rates in Ireland were high at 92 per cent, “but we must not become complacent. A number of imported cases of measles were recorded in Ireland last year”.

She stressed that vaccination was the only protection against the condition. Vaccination for MMR (measles, mumps, rubella) at 24 months of age was at 93 per cent in 2015 and had been above 90 per cent since 2008.

The HSE health protection surveillance centre circulated an update to all health professionals noting the risks and reminding them of what to do if they encounter a suspected measles case.

Ongoing training is being provided for health professionals and meetings have taken place with the Department of Education and school-management bodies.

Letters have been sent as well to all language and summer schools, and activities are planned for European immunisation week from April 24th to 30th.