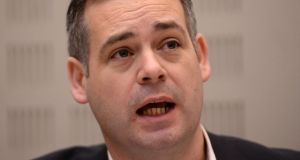 The Department of Finance has said a shortfall in expected taxation revenue in the first quarter of the year was not yet a cause for worry “but they are puzzling”.

If the shortfall is repeated in the second quarter, it would be a much greater concern, senior officials said.

Derek Moran, the top civil servant in the department, and Robert Watt, his counterpart in the Department of Public Expenditure, were present at the Oireachtas budgetary scrutiny committee yesterday where TDs questioned them on exchequer figures published by the Government earlier this week.

The figures showed tax revenue was almost €300 million below target for the first three months of the year.

Mr Watt and Mr Moran, who together play a pivotal role in the budget process, were accompanied by a number of senior officials from both departments. They told members of the committee the exchequer returns were not necessarily a cause for alarm.

Mr Moran said corporation tax receipts tended to be “lumpy” with big discrepancies from month to month. However, the officials noted that the shortfall in taxes was under a number of headings, and that if the trend continued in the second quarter of the year it would mean consequences for budgetary planning.

One official later said that if tax receipts continued the present trend, “all bets are off”.

Finance sources say there would be inevitable consequences for the budget. Spending increases in several departments are required to address demographic trends – some €450 million has been set aside this year to meet demographic pressures in health, education and social welfare.

Sinn Féin TD Pearse Doherty said the danger for Ireland was that “10 executives make a decision and we’re into serious austerity”.

Mr Moran replied: “That is a concern, yes.”

The Government will present its stability programme update next week, which sets out its adjusted economic forecasts and the expected size of the fiscal space for any budget increases later in the year.

Mr Moran said yesterday that despite the faltering tax revenue in the early part of this year, accelerated economic growth towards the end of last year means the department is likely to raise its forecast from growth this year from 3.5 per cent to 4-4.5 per cent. However, it is unlikely that the estimates for tax receipts will rise, Mr Moran said.

During exchanges with deputies on the level of information available to the committee, Mr Watt said that every week members of the Oireachtas made demands for new services.

“Every day in the Oireachtas there are demands for more and more everything,” he said. “Interest groups want more spending and less taxes. The demands are infinite.”

The officials declined to say where the extra cash for pay concessions for public servants announced this year would come from.

Minister for Public Expenditure Paschal Donohoe has previously told the committee that the costs of the pay rises would be met from existing budgets and he would tell the committee exactly where during the course of the year. However, there was no further information from the officials yesterday, to the annoyance of a number of TDs.

Mr Doherty said that the cost of the pay deal was nearly €250 million – almost half of the fiscal space available for next year’s budget, according to the current figures.