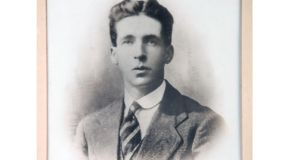 Joe Murphy, from Pouladuff on Cork’s southside, died on October 25th, 1920 on the 76th day of his hunger strike protest.

The family of an Irish volunteer, who died on hunger strike in Cork a century ago, have spoken of their pride at him making the ultimate sacrifice for Irish freedom.

Joe Murphy, from Pouladuff on Cork’s southside, died on October 25th, 1920 on the 76th day of his hunger strike protest, which he began on August 11th along with 10 other republicans in Cork Gaol.

Lord Mayor of Cork Terence MacSwiney joined them a day later after his arrest in Cork City Hall on August 12th. He died in London’s Brixton Prison on October 25th, 1920.

Murphy’s grandniece, Shirley Kelleher said the family was proud of the volunteer, whose death, along with that of his comrade Comdt Michael Fitzgerald from Fermoy a week earlier, was very much eclipsed internationally by that of MacSwiney.

“We are very proud of Joe. He was so committed to Ireland and he was so steadfast in his vision for Ireland and that’s why we are so proud of him,” Ms Kelleher told The Neil Prendeville Show on Cork’s Red FM.

Ms Kelleher, whose grandmother, Mary was Murphy’s younger sister, told how her granuncle was born in Lynn in Massachusetts on May 10th, 1895, but returned to Ireland with his parents and grew up in Pouladuff and attended Togher National School.

He joined the Irish Volunteers in 1917 and became a member of H Company, 2nd Battalion, Cork No1 Brigade and was involved in numerous attacks on British police and military posts including a well publicised attack on Farran police barracks a few miles west of Cork city.

He was arrested on July 15th, 1920 and held in Cork Gaol where, along with another 64 republicans, he began a hunger strike in protest at their continued detention. Although others gave up, Mr Murphy and 10 others persevered.

“Certainly like the family of the Lord Mayor, Terence MacSwiney, the Murphy family would have supported him in his hunger strike but there was huge sorrow at his loss. He was their eldest son,” said Ms Kelleher.

“It’s a very sad story but they were a very strong family to go through what they went through. Certainly Joe’s death was very much overshadowed by the death of the Lord Mayor, even though we certainly kept his memory alive in the local community in Ballyphehane and Togher.”

While plans to commemorate Mr Murphy by the Togher-Ballyphehane Centenary Committee had to be shelved due to Covid-19, Cork City Council has ensured the centenary of his death was not forgotten by making a documentary about him, My Unsung Hero, which is available on the council’s website.

Lord Mayor of Cork Joe Kavanagh said: “We need to ensure that patriots such as Joe Murphy, Terence MacSwiney and Tomas MacCurtain will always be remembered and never forgotten for making the ultimate sacrifice in making our city and our country what it is today.”

Mr Murphy was last year recognised by the State when his family were presented posthumously with the Service Medal (1917-1920) at a ceremony at Cork City Hall by then Lord Mayor of Cork Mick Finn, who acknowledged his courage and sacrifice.

“That he is finally rewarded with an official service medal of honour is just and right ... It means his place in history will live on even more,” Cllr Finn said.

Ms Kelleher said that her family had campaigned as far back as 1923 for a posthumous Service Medal without success but she paid tribute to the then minister for defence Paul Kehoe for awarding one and to Cllr Finn for presenting it to the family.

“He was an ordinary man who made an extraordinary sacrifice that we continue to honour and celebrate.”