Mother and daughter, Muriel and Máire MacSwiney, did not speak for 50 years 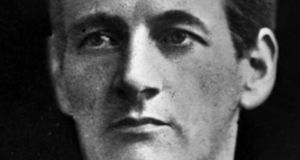 Terence MacSwiney, the Republican martyr, became an enduring symbol of self-sacrifice and stoicism even before he died on hunger strike 100 years ago. 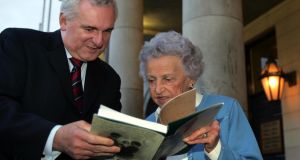 A file image of Máire McSwiney with then taoiseach with Bertie Ahern at the launch of her memoir History’s Daughter. Photograph: Eric Luke/The Irish Times.

Terence MacSwiney, the Republican martyr, became an enduring symbol of self-sacrifice and stoicism even before he died on hunger strike 100 years ago.

His most famous utterance – that it is not those who inflict the most suffering, but those who endure the most who will triumph – became axiomatic for freedom struggles around the world.

His death on hunger strike in London’s Brixton Prison on October 25th, 1920 did more to raise the conscience of the world about what was happening in Ireland than any other act during the War of Independence.

MacSwiney left a 28-year-old widow, Muriel, and a two-year-old daughter, Máire. His death would profoundly effect both women for the rest of their lives and lead to an irrevocable falling out, which lasted for half-a-century.

Muriel Murphy was born into the Cork brewing dynasty of the same name. MacSwiney was 13 years her senior. He opined that he would never marry given his myriad commitments to the cause of Irish republicanism yet he was smitten by her and she with him.

She shared his passion for the national movement to the consternation of her family who objected to the match. She married him a few days after her 25th birthday when she had received her inheritance.

Máire, their only child, was born in 1918 while her father was in jail in Belfast. In January 1920, before he became Lord Mayor of Cork, MacSwiney made his sister Mary joint guardian of Máire along with his wife.

Muriel MacSwiney was plagued with depression all her life. She “suffered from her nerves” and “took to the bed” to use the parlance of the time. She had moments of great tenderness and also inexplicable cruelty.

When Máire was four, her mother warned her that if she did not eat an egg, she would leave her.

“I thought this was unlikely to happen, so I refused to obey her,” Máire MacSwiney wrote in her memoir History’s Child. “But, sure enough, she was gone next day. It was two weeks after my fourth birthday when she left, and I didn’t see her again for about 18 months. I was soon to learn not to be upset by her frequent disappearances.”

As a woman of some means, Muriel MacSwiney could afford to seek out the best treatments and left Ireland in 1924 to live in Germany, bringing Máire with her. She placed her daughter in a boarding school and moved to Paris where she became a communist as a reaction to her privileged upbringing, like many did at the time.

Mother and daughter only met during the school holidays and the MacSwiney family in Ireland became concerned about Máire’s welfare. When they visited her in Germany in 1931, Máire fled the foster family she was staying with and returned to Ireland with Terence MacSwiney’s sister, Mary MacSwiney.

In the subsequent court case, Máire sided with her aunt against her mother and opted to live with the MacSwineys in Cork. Muriel MacSwiney disowned her daughter and never spoke to her again.

In 1945, Máire MacSwiney married Ruairi Brugha, the son of Cathal Brugha. The couple had lost their fathers at a young age during the revolutionary period. Cathal Brugha was one of the first fatalities of the Civil War. He was shot dead in July 1922 by Treaty forces.

Ruairi Brugha came to resent how his father had died, stating in a 2003 documentary entitled “When Ruairi Met Máire” that it was a waste.

Máire MacSwiney said in the documentary of her own father’s sacrifice: “It didn’t seem right to leave a child, but that attitude was common back then. It was the same for those who died in Flanders for king and country. They didn’t think of women or children. They were doing their duty.”

Ruairi and Máire had four children. Their youngest, Prof Ruairi Brugha, says he does not recall his mother ever questioning, despite the impact of her father’s death on her, the correctness of Terence MacSwiney’s decision.

“My mother and father were both of a generation, no doubt influenced greatly by their own parents, who believed in patriotism, and self-sacrifice for the wellbeing of the country,” he said.

“I don’t know if there is an objective perspective on such a decision. I think a reading of the biographies and source material on Terence would show that he weighed up the competing duties and responsibilities of being a father and husband, vis-á-vis the potential of his action to advance the cause of the freedom of Ireland, and made his decision; but that he worried greatly about the consequences of that decision, partly because of the mental fragility of Muriel and the potential impact on his daughter. Hence his decision to give his sister a guardianship role.”

Prof Brugha says he still gets emotional thinking about the circumstances of his mother’s escape from Germany.

His mother was sympathetic to her own mother, he believes, as both suffered from depression. Prof Brugha reckons Muriel MacSwiney would nowadays be diagnosed with bipolar disorder, which would go a long way to explaining her behaviour.

“Muriel lost her husband to Ireland. Unfortunately Muriel was putting her own convictions first and the interests of a young and vulnerable girl, her daughter, came second,” said Prof Brugha.

“When my mother was finally given the option, the first time, of having a normal family she grasped that option.

“In terms of our upbringing, both my mother and father protected us from being over-romanticised, thinking of ourselves as special because of who our grandfathers were.”

Prof Brugha is a retired emeritus professor of public health and epidemiology at the Royal College of Surgeons in Ireland (RCSI).

At the beginning of the pandemic he was a prominent voice on Irish airwaves talking about Covid-19. He says he has been thinking a lot of what lessons can be drawn from Terence MacSwiney’s life that might be applicable to the current situation that the country finds itself in.

The circumstances of his death have overshadowed the work Terence MacSwiney did in his life to better the fortunes of others, he believes.

In the nine months he was mayor, he established a commission to implement a minimum wage in Cork, removed all public appointments from patronage and initiated grant support for child welfare.

“He wasn’t looking to die. He was looking to make people’s lives better,” Prof Brugha said.

“None of us are going to be called to go on hunger strike, none of us are being called to die for the people around us. He was willing as a patriot to put other people first. The only way we will control Covid-19 is if we get a high level of compliance doing the things we all need to do.

“Covid does call on us all to make sacrifices in the interests of others and I think that is the connection with Terence MacSwiney.”