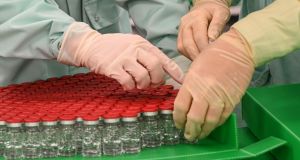 File photo of vials prepared for clinical trial of University of Oxford’s Covid-19 vaccine candidate, AZD1222, one of the vaccines in development worldwide. Photograph: Vincenzo Pinto/AFP via Getty

Just over half the population would take a Covid-19 vaccine if there was one, according to a survey commissioned by the pharmaceutical industry.

Men are more likely to take the vaccine, and older people more than the young, the survey for the Irish Pharmaceutical Healthcare Association suggests.

More than 150 candidate vaccines for Covid-19 are currently in development, with the first three products expected to be approved in the coming months. However, questions remain about the effectiveness of a vaccine for the virus and how long it would take to roll out supplies globally.

A further 1,025 confirmed cases of the virus were reported by the National Public Health Emergency Team on Sunday. This brings to 57,128 the total number of cases of the disease in the Republic.

No new deaths were reported by Nphet, leaving the total number of deaths at 1,882.

Meanwhile, frustration is growing among doctors at what they see is a failure to understand the rule on isolation for Covid-19.

“Recurring lockdowns will be our only option until the guidance to isolate/restrict movements is uniformly followed,” according to Dr Nuala O’Connor of the Irish College of General Practitioners, who urged employers to stop asking close contacts to get tested “so they can return to work”.

Chief medical officer Dr Tony Holohan said: “If you’re a confirmed case, have had a test or have symptoms of Covid-19, you must self-isolate for 10 days. If you live with a case or have been told you’re a close contact, you must restrict your movements for 14 days.

“Everyone else should stay at home, unless for essential reasons or for exercise within 5km of where you live.”

According to the Department of Health, there were 315 hospitalised patients with Covid-19 on Sunday afternoon, up from 312 the day before. ICU numbers increased by one to 38.

Tipperary, with an incidence of 134.8, has the lowest figures nationally.

No testing was carried out at the weekend at the National Virus Reference Laboratory in University College Dublin, which is suffering staff shortages after some were forced to self-isolate. The NVRL said this would not affect national testing capacity and that the 600 daily tests normally performed by the lab on the Belfield campus would be processed by other facilities.

A number of key indicators for the spread of Covid-19 have declined in recent days, latest data shows.

The proportion of people testing positive, along with the number of close contacts per person – both important indicators of the rate of transmission of the virus in the community – have fallen.

Health Service Executive chief executive Paul Reid on Sunday noted a fall in the positivity rate for tests, which on Saturday stood at 6.2 per cent for the previous seven days.

Mr Reid also highlighted a drop in the number of close contacts, down from an average of 4.5 to three for each case.

“Most close contacts are household. Still very early but good. We’re all part of the solution. Let’s keep this going,” he tweeted.

More than 1,000 new cases a day of the disease have been recorded on 11 days this month, but about 300 fewer cases were recorded last week compared to the one before.

The rate of community transmission has remained constant, at 28 per cent, since the start of the month.

Officials caution against reading too much into single-day figures but the improvements seen across a range of indicators points to some stabilisation of the situation.