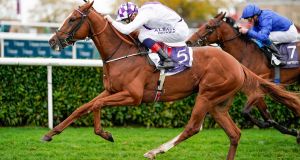 MacSwiney, owned by Jim Bolger, won the Vertem Futurity Trophy at Doncaster on Saturday at 12/1, holding off the favourite One Ruler. Photograph: @AtTheRaces/Twitter.

A horse named after Terence MacSwiney has won a race at Doncaster in England a day before the centenary of the former Lord Mayor of Cork’s death.

MacSwiney, owned by Jim Bolger, won the Vertem Futurity Trophy at odds of 12/1, holding off the favourite, One Ruler.

MacSwiney died on October 25th, 1920 while on hunger strike in London’s Brixton Prison. He went 74 days without food and his death made headlines around the world, focusing global attention on the Irish fight for independence.

The namesake horse also has a reputation for endurance and made light of heavy ground at Doncaster to record the surprise win.

When interviewed afterwards by At The Races TV, Bolger said: “I must have known he was pretty good in January when I called him MacSwiney. He’s one of our outstanding patriots.”

However, jockey Kevin Manning told Racing TV that he didn’t know who the horse was named after, to which the commentator suggested “Jim will be furious that you didn’t know”.

As a result of his win, bookmakers have halved the odds on MacSwiney winning next year’s Epsom Derby from 40/1 to 20/1

The Terence MacSwiney Commemoration Committee in London will hold a small wreathlaying ceremony on Sunday at Brixton Prison to mark the centenary. It will be broadcast live on their Facebook page.

The committee said it remains “determined” to honour the memory of MacSwiney and will do so next year once the Covid-19 restrictions are lifted.