New Covid-19 contact-tracing regime to be established for schools 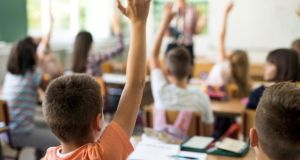 A revamped contact tracing regime is to be established for schools when they reopen after mid-term to help ensure there is a faster response to positive cases of Covid-19.

School principals and teachers’ unions have criticised slow turnaround times, which have left many schools waiting several days before receiving guidance from public health authorities once Covid-19 cases have been identified.

The Department of Education says a national network of new school teams, to be led by public health professionals and supported by education officials, will be established from November 2nd.

This aims to speed up the time it takes to alert schools to close contacts of positive cases, as well as supporting principals to find substitute teachers and special needs assistants in cases linked to Covid-19 absences.

Health authorities are also understood to be considering rapid testing for Covid-19 in schools, which has been a key demand of teachers’ unions.

The current PCR (polymerase chain reaction) tests are regarded as the gold-standard of testing for the virus, but are expensive and time-consuming.

Other countries have introduced cheaper testing methods with quicker turnaround and on-the-spot results, but which have lower levels of accuracy.

It has advised that rapid antigen and other alternatives should only be used to enhance the current system of PCR testing.

For example, results from rapid tests may need to be confirmed with the current PCR test.

The Government, meanwhile, insists schools remain a safe environment for children and will reopen as planned after the mid-term break.

Minister for Education Norma Foley has said latest data on testing shows positivity rates for close contacts of individuals diagnosed with Covid-19 are much lower in schools compared to the wider community.

HSE figures, for example, show a total of 15,632 students and teachers have been “mass-tested” in schools after the identification of a positive case. These tests revealed a further 443 cases.

This represents a positivity rate of 2.8 per cent compared to more than 7 per cent in the wider community.

However, these figures do not show the total number of cases that have been detected in schools and only include those following mass testing.

The HSE did not provide this information when requested by The Irish Times.

However, data compiled by a Facebook group called Alerting Parents of Outbreaks in Schools claims that about 990 cases have been identified in about 600 schools to date since schools reopened in late August.

It says its figures are based on school notices, which have been sent to parents on foot of Covid-19 cases.

At primary level, the group has recorded 320 notices from schools alerting parents to at least one case of Covid-19, representing 10 per cent of primary schools.

Teachers’ unions, meanwhile, have criticised what they say are inconsistencies in identifying close contacts.

In a statement, the HSE said the definition of a close contact within a school setting is variable and depends on a range of factors such as classroom structure, proximity to an index case, social networks and other factors.