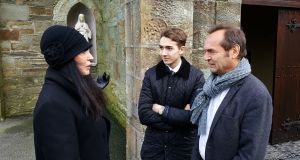 Yvonne Ungerer sympathises with Bertrand Bouniol and his son Baptiste at mass in Goleen, west Cork, to mark the 20th anniversary of the murder of his sister Sophie Toscan du Plantier. Photograph: Barry Roche

The family of murdered French film producer Sophie Toscan du Plantier pledged to continue their fight to bring her killer to justice as they attended a mass in Goleen near her holiday home at Toormore in west Cork to mark the 20th anniversary of her killing.

Ms Toscan du Plantier’s son, Pierre Louis Baudey-Vignaud, and her brother, Bertrand Bouniol, spoke of the tragedy that has haunted their family for two decades after they were invited by Fr Bernard Jones to address massgoers at the Church of Our Lady, Star of the Sea and St Patrick in Goleen on Sunday.

Mr Bouniol was accompanied by his youngest son, Baptiste – whom he explained was born on December 18th, 1996, and the last time the family saw his sister alive was when she visited her newly-born nephew in hospital in Paris on December 19th – the day before she left for Ireland.

Mr Bouniol recalled how he had come to Cork with his parents, Georges and Marguerite Bouniol and his aunt Marie Madeleine Opalka on Christmas Day 1996 to identify his sister’s body and how they returned a year later for her first anniversary mass at the small stone church in Goleen.

Ms Toscan du Plantier’s son, Pierre Louis Baudey Vignaud spoke about how much his mother loved Ireland and in particular the people of west Cork and he asked people to remember her and all the other victims of murder in Ireland in their prayers.

“Dear God, dear father, dear friends, dear Irish, dear Ireland – I would like to thank you for the welcome you have shown us in your church . . . my mother, Sophie, was murdered in December 1996 – this is the 20th anniversary of her killing and today is another dead day without justice.

Mr Baudey-Vignaud, who visits Toormore regularly with his wife, Aurelia, and children Sophie (4) and Louis (3), spoke about how he still loves Ireland and west Cork and he wants his children to love Ireland despite the horror that befell his family here.

“Justice, Irish and French, is very close to the truth – I know some of you are frightened because the person who killed my mother is still living here but I promise you – we will fight for justice until our final breath and this country is a peaceful land again – God bless you and God bless Sophie.”