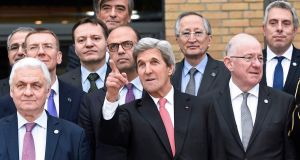 US secretary of state John Kerry with Ireland’s Minister for Foreign Affairs Charlie Flanagan, right, and other foreign ministers and representatives in Paris. Photograph: Bertrand Guay/AP

More than 70 countries and international organisations met in Paris on Sunday to “reaffirm support for a just, lasting and comprehensive resolution of the Israeli-Palestinian conflict”, a joint declaration said.

The communique stressed the need “to take urgent steps in order to reverse the current negative trends on the ground, including continued acts of violence and ongoing settlement activity”.

The 1½-page statement may be endorsed by EU foreign ministers on Monday and by the UN Security Council later in the week. It was intended as a message to US president-elect Donald Trump, who will be inaugurated on Friday.

Attention focused on announcements by Mr Trump’s entourage, including his future ambassador to Israel, David Friedman, that the US will move its embassy from Tel Aviv to Jerusalem. That would be interpreted as acceptance of Israel’s annexation of the eastern, Arab part of the city.

“It is urgent to avoid any unilateral action that would further inflame the situation on the ground in Jerusalem,” French foreign minister Jean-Marc Ayrault warned.

Mahmoud Abbas, the president of the Palestinian Authority, has appealed to Russian president Vladimir Putin and to Mr Trump to prevent the move. Grand Mufti of Jerusalem Muhamad Hussein has said it would be an assault on all Muslims.

Mr Ayrault pointed out that previous US presidents abandoned plans to move the embassy. “I am sure the sense of responsibility will prevail,” Mr Ayrault said.

The EU recognises Tel Aviv, not Jerusalem, as Israel’s capital. While Mr Trump’s intentions are “a source of some concern, it would be unwise to add to speculation”, said Minister for Foreign Affairs Charlie Flanagan, who represented Ireland at the peace conference.

The conclusions of the Paris conference will now be added to more than a dozen previous security council resolutions and peace plans. Each time, the list lengthens as it recapitulates previous unfulfilled wishes.

Speeches and the final statement on Sunday took particular note of security council resolution 2334 of December 23rd, 2016, “which clearly condemned settlement activity, incitement and all acts of violence and terror”.

Outgoing US secretary of state John Kerry’s speech of December 28th, which laid down the principles of a two-state solution, was also widely referenced.

“The voice of the world expressed itself” in resolution 2334, Mr Ayrault said. “It must be taken seriously. A few days later, John Kerry’s courageous, worthy and profoundly moving speech echoed the disquiet of the international community.”

Attendance at the conference was one of Mr Kerry’s last acts in office.

More than half the members of prime minister Binyamin Netanyahu’s government are openly hostile to a two-state solution.

The only alternative, observers note, is one state in which Palestinians will eventually outnumber Jewish Israelis, and which would live in a perpetual state of civil war.

“I am here today to reinforce Ireland’s commitment to the two-state solution,” Mr Flanagan said. “Unless there is movement, particularly on the part of the Israelis, the two-state solution will no longer be viable. I am very concerned at the ongoing development of the settlements and the further occupation of lands.”

Mr Flanagan rejected statements by Israeli leaders that the conference was “rigged” or a repetition of the Dreyfus affair.

Some 1,000 people responded to a call by the Representative Council of French Jews (CRIF) to demonstrate outside the Israeli embassy in Paris against French “intervention”.

Mr Ayrault said he spoke “as a friend of Israel” and described the conference as “a hand held out” to Israelis and Palestinians. He wanted it “to create a state of mind rather than an organisation. That is why we don’t respond to excessive arguments. We want to be constructive.”

But noting Mr Netanyahu’s past expressions of readiness to negotiate directly with Mr Abbas in Paris, and his refusal to travel to Paris to see Mr Abbas on Sunday night, Mr Ayrault concluded that the Israeli prime minister “obviously changed his mind”.