UK firm led by ‘organisational architect’ got three payments of €18,500 for ‘values in action’ programme 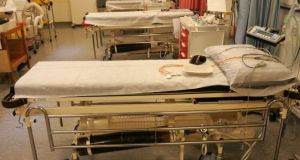 University Hospital Limerick: earlier this month there were 60 patients on trolleys in the emergency department and on general wards

These included three payments of €18,500 each on June 30th, September 30th and October 31st for work on a “Values in Action” programme which saw HSE staff attend seminars in Limerick to learn how to bring values such as “care, compassion, trust and learning to life in the health services across the mid-west”.

An additional €4,800 in expenses was also paid to Dr Herrero’s firm, records released to The Irish Times under the Freedom of Information Act show.

The UL Hospital Group and the Mid-West Community Health Organisation are collaborating on the initiative, described by the HSE as a “behavioural and cultural change movement that will lead to improved workplaces for our staff and will deliver better experiences to patients and service users”.

Dr Herrero’s website describes him as an “organisational architect” who is “in the quest for building remarkable organisations”.

His company’s website says it works with “people with ambition, who see possibilities, who have a sense of urgency and who want to make a difference in their worlds - teams, leaders, companies, society”.

“Also, we don’t do misery. Pain is sometimes inevitable but misery is always a choice,” it says.

Clarifying the nature of the payments on Monday, the HSE said the fees were paid to the Chalfont Project for a team of three people, including Dr Herrero.

“The team travelled to the Mid-West frequently (for this fee) as well as providing ongoing support (remotely) to the HSE team working on Values in Action”.

“Values in Action is designed to provide better experiences for patients and service users and to improve workplaces for our staff. This initiative is being undertaken in response, in part, to the recommendations contained in the Hiqa investigation into the Midlands Regional Hospital, Portlaoise.

“This report identified that significant changes in culture in the health service were needed to ‘orientate the culture towards the inherent qualities of compassion and openness in the care of patients and families’ in order to deliver a better experience to patients and their families when engaging with the health services.”

According to the HSE, the Values in Action programme was underpinned by “the belief that real sustainable cultural change is shaped by the behaviours of small groups of influential individuals at all levels across the organisation.

“These well-connected individuals are capable of creating a bottom-up, grassroots social movement that makes our values, which we have translated into nine visible behaviours, a recognisable part of our everyday conversations.”

The nine “behaviours” were informed by a “comprehensive review of staff and patient/service user feedback from surveys, direct engagements and complaints”.

“They are practical, very doable and cost us nothing,” the HSE said.

The HSE also engaged the services of social media experts last year. Food blogger and social media consultant Niall Harbison was recruited to address staff about his vision for healthcare in Ireland at a seminar in June.

Social media trainer Samantha Kelly, who trades under the name “The Tweeting Goddess”, was paid €650 to address staff at another HSE meeting in Dublin.

* This article was amended on Monday, January 16th.