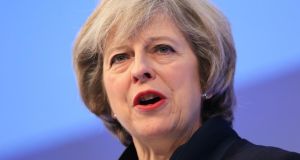 British prime minister Theresa May is expected to say this week that Britain is prepared to leave both the single market and the EU’s customs union. Photograph: Jonathan Brady/PA Wire

Fears that Britain will leave the European Union’s customs union, raising the prospect of tariffs on goods moving across the Border, have intensified in Dublin following leaks of British prime minister Theresa May’s forthcoming major speech on her government’s Brexit plans.

Mrs May will say Britain is prepared to leave both the single market and the EU’s customs union – which allows for the free movement of goods only – but will seek a “bespoke” deal that will include elements of both, according to reports in London yesterday.

Sterling dropped more than 1.5 per cent on foot of the reports to below $1.20 in early Asian trading .

The news also met a glum response in Dublin where Ministers and senior officials are reluctantly concluding that a “hard Brexit”, where Britain breaks completely with the EU, is becoming more likely.

Minister of State for Financial Services Eoghan Murphy, speaking to Irish investors in Hong Kong, where he is promoting the financial services industry, suggested a hard Brexit was now inevitable, and warned of the danger of a “disorderly” departure by Britain from the EU. 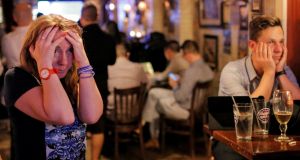 Ministers and Government senior officials have not been briefed on what, if anything, Mrs May intends to say about Northern Ireland and the consequences for the Border.

“We look forward to hearing what the prime minister has to say,” the Government spokesman said last night.

He added: “It’s clear that there is a need for clarity from the UK as soon as possible on their proposed approach to negotiations. Ireland’s key priorities remain the economy and trade, the common travel area, the Northern peace process and the future of Europe. ”

If the UK leaves the single market and the customs union, and fails to conclude a tariff-free trade agreement with the EU, then goods crossing the Border will almost certainly attract tariffs – with obvious implications for trade between the two parts of the island, and also between Ireland and Britain.

The view from Dublin and London was that Mr Ó Muilleoir was correct and that there was little chance of any 11th-hour compromise that would obviate the need for Secretary of State for Northern Ireland James Brokenshire to call elections.

The Assembly meets today and Sinn Féin will be asked to nominate a replacement as Deputy First Minister for Martin McGuinness. If the party fails to nominate, then Mr Brokenshire will be legally obliged to call elections sometime after 5pm today.

“Sinn Féin have indicated that they’re not intending to put a replacement forward,” Mr Brokenshire said.