DUP Minister accused of favouring ‘one side of community’ 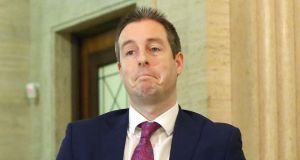 Nationalist politicians have accused the DUP communities Minister Paul Givan of favouring the unionist and loyalist “side of the community” when awarding £1.9 million in grants for community halls.

Mr Givan, who since Christmas has been embroiled in controversy after first revoking and then restoring a Líofa Irish language promotion grant of £50,000, has now been accused of discriminating in favour of organisations from the unionist and Protestant tradition.

“This looks like yet another example of blatant discrimination and the DUP’s contempt for the wider public,” said Sinn Féin Assembly member Alex Maskey after a list was published of 90 organisations which are to benefit under the “community halls pilot programme”.

On Sunday Mr Givan’s department said it was not in a position to disclose the list of recipients of funding to improve and restore community halls.

The Belfast-based Sunday Life newspaper, however, published a list of beneficiaries of the scheme which showed that more than 30 Orange Order halls and loyalist bands received grants. In contrast, according to the list, just two GAA clubs and two Ancient Order of Hibernian halls benefited.

“I have seen the list of recipients and clearly these public funds have been significantly directed at one section of the community,” said Mr Maskey.

“This is a shameful abuse of public money and this Minister’s contempt for the public knows no bounds.

“This only further undermines public confidence in the political institutions and the people must now be allowed to have their say on the DUP’s arrogance.”

SDLP leader Colum Eastwood accused Mr Givan of appearing “to be a Minister for half of the community”.

At the time of writing the DUP and Department of Communities had no response to the criticism of Mr Givan. However, in a press released about the scheme on Friday the department said “a robust, transparent and accountable assessment process was followed, with all applications being scored against the stated criteria”.

“The criteria considered previous funding, condition of hall, benefits for existing users, potential to attract new users and availability of services within the area,” it said.

Mr Givan said the scheme was hugely oversubscribed, with more than 850 applications: “There is clearly a need for this type of programme and my hope is that in future years more applicants can see their projects delivered.”