North election likely to be called today as Assembly sits

Northern Secretary ‘not contemplating’ return to direct rule after elections 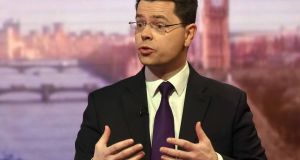 Northern Secretary James Brokenshire on BBC’s ‘Andrew Marr Show’: he said his concern was that an election campaign would be divisive. Photograph: Jeff Overs/BBC/PA Wire

Northern Ireland Assembly members will gather at Stormont on Monday in the firm expectation that by teatime the Northern Secretary James Brokenshire will have called Assembly elections.

The first item of business today is the appointment of a First Minister and Deputy First Minister. However, Sinn Féin has insisted it will not be nominating anyone to replace Martin McGuinness who resigned last Monday in protest at DUP leader Arlene Foster’s refusal to stand aside over the “cash for ash” renewable heat incentive (RHI) crisis.

If that remains the case until a deadline of 5pm this evening then Mr Brokenshire is obliged to call Assembly elections. The earliest they can take place is in 43 days’ time.

As parties began choosing election candidates there was surprise last night at former Sinn Féin education minister Caitriona Ruane’s announcement that she will not run again. She has been an MLA for South Down for 14 years.

After the elections the parties will have three weeks to form a new Northern Executive and Assembly. Sinn Féin already has made clear that this won’t happen unless issues such as the Irish language, “respectful” powersharing, LGBT and ethnic minority rights and a range of other matters are addressed.

If no deal is agreed within three weeks then Mr Brokenshire should call another round of Assembly elections. He did not disclose what he would so in such an eventuality but said he was “not thinking about” direct rule if there was political stalemate after the election.

“I’m not contemplating any alternatives to devolved government in Northern Ireland. That is my absolute and resolute faith,” he told BBC television’s Andrew Marr Show.

“My responsibility is to see that we are working with each of the parties to ensure that we are not looking at greater division,” he said.

“My concern is that an election campaign will be divisive, will actually lead to greater distance between the parties.”

Mr Brokenshire said he would encourage Northern parties “to think about those big issues and how we build things back together again” after the elections. These are likely to be held in early March.

“My absolute focus is on how we bring the parties together,” he added. “There is a relatively short period of time after the election – about three weeks – to see an Executive being formed. What I’m focused on is that we maintain the institutions. It’s important that we are working together to see that people are focused on the great opportunities for Northern Ireland.”

Mr Brokenshire said that regardless of the expected dissolution of Stormont the British government would press ahead with triggering Article 50 in March to take the UK out of the European Union.

“We’re not delaying the timetable. We still remain absolutely committed to triggering article 50 by no later than the end of March,” he said.

SDLP leader Colum Eastwood said triggering Article 50 could be illegal “in the absence of functioning institutions in Northern Ireland”.

He said that pending the outcome of a challenge to Brexit in the London Supreme Court “there remains a major question mark over the legality” of Mr Brokenshire’s statement that there would be no delay in activating Article 50.

‘Lines in the sand’

The Presbyterian moderator Dr Frank Sellar said that “with an election on the horizon and what are likely to be very difficult negotiations that follow, I call on all involved to show a willingness to listen carefully to each other, to honour and value one another and to work constructively in partnership”.

“The drawing of too many ‘lines in the sand’ will only thwart progress on resolving the pressing issues that we face as a society,” he warned.

The Northern Assembly is also expected to vote on Monday on proposals to limit the cost of RHI, which over the next 20 years could result in an overspend of £490 million.

It may also vote on a proposal not to extend the British so-called “bedroom tax” to Northern Ireland. This tax reduces housing benefit to some social housing tenants who have spare bedroom capacity.

It may also vote on a Sinn Féin motion of no confidence in the DUP speaker Robin Newton.