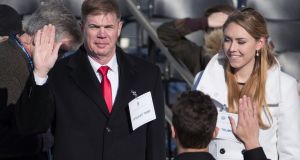 Stand-ins for US president-elect Donald Trump and Melania Trump in a dress rehearsal for the presidential inauguration on January 20th. Photograph: Michael Reynolds/Epa

CIA director John Brennan denounced as “outrageous” Donald Trump’s remarks comparing US intelligence agencies to Nazi Germany and warned him that he must watch what he says in the interests of national security.

Mr Brennan cautioned against Mr Trump’s “talking and tweeting” and said that the incoming Republican president had to be “mindful” that he did not have a full understanding of the threat posed by Russia.

His parting shots at the incoming president, in an interview with Fox News five days before Mr Trump’s inauguration, come after the Republican last week implied that the US intelligence community leaked an unverified dossier detailing compromising information that Russians had against the billionaire tycoon.

“Intelligence agencies should never have allowed this fake news to ‘leak’ into the public. One last shot at me. Are we living in Nazi Germany?” Mr Trump tweeted on Wednesday.

Mr Brennan, an appointee of President Barack Obama who will leave his position with the outgoing administration, took issue at Mr Trump’s remarks.

“What I do find outrageous is equating an intelligence community with Nazi Germany. I do take great umbrage at that and there is no basis for Mr Trump to point fingers at the intelligence community for ‘leaking’ information that was already available publicly,” Mr Brennan told host Chris Wallace on Fox News Sunday.

Asked whether the decision by the intelligence agencies to brief Mr Trump and Mr Obama on the unsubstantiated claims encouraged the media to report on the dossier, the CIA director defended their move.

“Bringing to the attention of the president-elect as well as to the current president that this information is circulating out there was a responsibility in the minds of the intelligence directors,” said Mr Brennan.

He denied that the intelligence agencies were attempting to undermine and delegitimise Mr Trump’s election.

“Making sure that the president-elect himself was aware of it – I think that was the extent of what it was that the intelligence chiefs wanted to do,” he said.

The interview was further evidence of the rift between Mr Trump and the intelligence agencies that he will lead. For months he disputed their assertion that Russia was behind attempts to sway the election for Mr Trump by hacking Democratic computers and leaking damaging information about Mr Trump’s rival Hillary Clinton.

Mr Brennan urged the next US president to temper his language and warned against the implications of his off-the-cuff statements, particularly his suggestion that he might drop sanctions against Russia.

“Spontaneity is not something that protects national security interests, and so therefore when he speaks or when he reacts, just make sure he understands that the implications and impact on the United States could be profound,” he said.

“It’s more than just about Mr Trump. It’s about the United States of America.”

The top Obama official said that absolving Russia of actions taken in recent years is “a road that he needs to be very, very careful about moving down”.

Separately, the fallout continued from the assertion by Democratic congressman and civil rights icon John Lewis in an interview with Sunday talk show NBC’s Meet the Press that Mr Trump was not “a legitimate president” because Russia helped him get elected, with the president-elect’s incoming chief-of- staff Reince Priebus calling his remarks “irresponsible”.

Mr Trump castigated the Georgia congressman, one of 23 Democrats and Clinton supporters who plan to boycott the inauguration in protest, tweeting that he was “all talk, talk, talk – no action or results”.

Mr Lewis, an organiser in the 1960s civil rights movement, had his skull fractured by police in a march organised for a voting rights for black Americans that turned violent in Selma, Alabama, in 1965.

Images of the police brutality circulated around the world and increased the political pressure for change, culminating in the passage six months later of the Voting Rights Act for all people, regardless of skin colour.