Families react to Bloody Sunday verdict: ‘This is not the end of it’

Families of victims of the Bloody Sunday killings have expressed both disappointment and relief at the news that one former British soldier is to be charged following an announcement by the North’s Public Prosecution Service. Video: Reuters 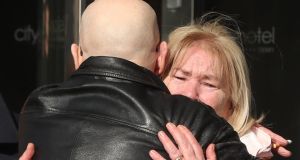 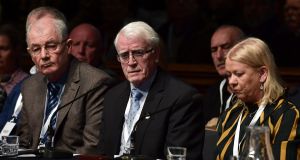 John Kelly (C), whose brother Michael died during Bloody Sunday, during a press conference in reaction to the Bloody Sunday prosecution announcement. Photo by Charles McQuillan/Getty

Families of victims of the Bloody Sunday killings have expressed both disappointment and relief at the news that one former British soldier is to be charged following an announcement by the North’s Public Prosecution Service (PPS).

Speaking at a press conference in Derry’s Guildhall, John Kelly — whose brother Michael was killed on Bloody Sunday — said “the Bloody Sunday families are not finished yet”.

“This is not the end of it,” he said. “We will continue on and hopefully bring the rest of the perpetrators to justice.”

Earlier visibly upset family members, some in tears, arrived at the Guildhall after they were told of the decision by the PPS.

One soldier, known as Soldier F, is to be charged with the murders of James Wray and William McKinney, and the attempted murders of four others, on Bloody Sunday, the PPS announced earlier.

The families were cheered on their arrival at the Guildhall. A minute’s silence was also held in memory of the 14 victims of Bloody Sunday.

“I was going to say good morning,” said John Kelly, “but I don’t think it is.” Speaking of his “terrible disappointment” at the decision to only prosecute a single soldier, Mr Kelly said that the families nevertheless welcomed the decision that a prosecution would take place, and said all the relatives were fully behind the Wray and McKinney families.

“Their victory is our victory,” he said. Alana Burke, who was injured on Bloody Sunday, said the announcement was a “vindication” of the families “decades-long campaign to clear the names of our loved ones and to bring those responsible for their deaths and injuries to justice.

“When the Bloody Sunday Justice Campaign was launched in 1992 we had three clear demands – to have the Widgery whitewash overturned and replaced by an independent inquiry; to gain a formal acknowledgement of the innocence of all our loved ones, and to prosecute those responsible.

“With today’s news, we now achieve our third aim,” she said.

The brother of Mickey McKinney, who heard today that Soldier F will face prosecution in connection with the death of his brother William, said that the families had also had to face the disappointing news that in some cases there will not be prosecutions. “We are mindful of those families who received that news today,” he said.

“It simply means that if these crimes had been investigated properly when they happened, and evidence gathered at the time, then the outcome would have been different,” said Mr McKinney.

“Everyone deserves justice, including those whose loved ones were murdered by the British state. For us here today, it is important to point out that justice for one family is justice for all of us.”

The solicitor for the Bloody Sunday families has said they will give “detailed consideration” to the Public Prosecution Service (PPS) decision not to prosecuted other soldiers in connection with Bloody Sunday.

Ciaran Shiels, of Madden & Finucane Solicitors, said he was “disappointed that not all of those responsible are to face trial”.

“We will give detailed consideration to the reasons provided for decisions not to prosecute the other soldiers, with a view to making further submissions to the Prosecution Service,” he said.

“We shall ultimately challenge in the High Court, by way of judicial review, any prosecutorial decision that does not withstand scrutiny.”

Mr Shiels welcomed the decision to prosecute Soldier F, describing it as a “remarkable achievement by the families and victims of Bloody Sunday.”

“Notwithstanding the unprecedented attempted political interference with the independence of the judicial process, the families have not only succeeded in consigning the Widgery report to history, and securing the complete vindication and declaration of innocence of all of the victims of Bloody Sunday through the Saville Inquiry, they have now secured the prosecution of Soldier F for the murder and attempted murder of 6 innocent people,” he said.

Denis Bradley, the former vice-chairman of the Northern Ireland Policing Board, who was a priest in Derry on Bloody Sunday says he is annoyed at the words of the DPP when announcing that one soldier is to be prosecuted.

Saying that there was not enough evidence for prosecution was “almost an insult” to the many people who were witnesses that day had given evidence, he told RTÉ news.

Mr Bradley said that legacy issues should not be dealt with by the judicial process. “It’s not a good system, it seldom ends up with the conclusions and closure that people seek.”

The Saville inquiry had been closer to providing what people needed “because it was about truth, it wasn’t necessarily about prosecutions. It was about learning the truth,” he added. “We have to learn from this.”

Solicitor and civil rights activist Michael Finucane said, “The way in which legacy issues and the circumstances of controversial incidents in parts of Ireland have been effectively glossed over and brushed under the carpet particularly by the British state... It is the greatest untreated wound of the conflict.”

Amnesty International’s Northern Ireland campaigns manager Grainne Teggart said that with justice obstructed and delayed for so long, justice has now been denied to many of the families.

“Today is a stark reminder that victims have long been paying the price for the failure of government to effectively deal with the past. We call on the UK Government to ensure there are no barriers to justice and make clear there will be no amnesty for human rights abuses, including those committed by security forces.”

“The campaign has led to one soldier being charged with killing, so that is to some extent a vindication of the campaign,” he said.

“However, you have to factor in also that you have a number of families who heard that the person who killed or wounded their loved one is not to be charged.

“Some of them are quite distressed and in a strange way I think that one person has been charged deepens the distress, or gives it a sharper edge,” he said.

Describing the day as “emotional”, Mr McCann said that some of the families would want to take time to consider their next steps.

“We’ve been on the road with this for 47 years,” he said. “Have we got the energy to carry anything forward? I think a lot of families will say, very understandably, that’s it. We’ve got a sort of result here, and we can’t go on with this forever.

“Let’s have this as the full stop on the campaign.”