Forget Brexit, the boom is back at Cheltenham 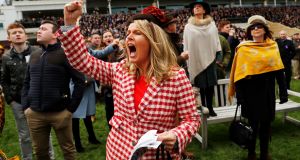 Nama who? Troika? What troika?

It was like Cheltenham scooped up to 59,209-strong crowd at Prestbury Park and transported us all back to 2007. Like we had all slept for 12 years and woken up to find Bobbie Ewing in the shower.

There was property developer Sean Mulryan and his wife, Bernardine, mobbed by family and friends as City Island romped home in the first race of the Cheltenham Festival’s second day. It was the Ballymore Novices’ Hurdle, sponsored by Mulryan’s own property company, long free of Nama’s clutches.

“It is a dream come true,” Mulryan said, struggling to compose himself after a succession of bear hugs.

Among Mulryan’s triumphant gaggle was Brian Cowen, the former taoiseach, laughing and applauding.

Asked how much he won on the 8-1 winner, a smiling Cowen said: “Nothing that the inspector of taxes needs to know about,” chuckling at his joke.

Bovale Developments builder Mick Bailey, one of Mulryan’s company of friends and one-time star of the planning tribunal, was quick to offer the husband and wife hearty congratulations.

I think it is the first real business in Ireland. It is kind of weird, like a mystic thing

Cork man Michael O’Flynn, a fellow Nama escapee whose horse Sams Profile was beaten in the same race, was another man to make a beeline to shake Mulryan’s hand.

“This is Irish land,” O’Flynn said, relishing Cheltenham’s “amazing” atmosphere after Ireland scored the fifth of what would be eight Irish-trained winners out of 14 at the jump racing festival’s halfway point.

Mulryan’s victory in his own sponsored race felt like a sign the good times were really back.

“A lot of people that maybe haven’t been here for a while are back,” O’Flynn said.

Bernardine enjoyed the fact her husband, as sponsor, would have to hand her the trophy.

“That’s the crazy thing,” her husband said, delighted at the prospect. Proper order too – it was Ladies’ Day at Cheltenham.

Film director Jim Sheridan and artist Guggi sprinkled some showbiz over the winners’ enclosure as members of Mulryans’ winning party, joining Cowen, Bailey and others on the podium after the prize-giving for a photo.

Sheridan agreed he couldn’t have scripted the finale of a tightly contested race any better.

“That was a very beautiful and exciting moment,” said an elated Guggi, at his second Cheltenham, having made his biggest bet on a horse (€20 each way). “I just wanted to keep jumping up and down.”

Sheridan – on a winning high – went deeper, tracing the Irish love of Cheltenham and Ireland’s proud ownership of horses back to Napoleonic times.

“I think it is the first real business in Ireland,” he said. “It is kind of weird, like a mystic thing.”

Talk of Brexit and how it might affect horse movements from Ireland brought him down to earth.

“It is a mess,” he said, admitting he was watching proceedings in the House of Commons “a little bit”.

“But I’d rather be here in Cheltenham,” he added, laughing.

Mick Bailey, who won on a “few bob each way”, said he was “totally disillusioned” with British politicians over Brexit. Cheltenham was “a great way” to bring Irish and English people together, he said.

Proving his point, a few hours later the same winners’ enclosure was filled with Royals (Camilla and Anne) and the cream of the English horsey set celebrating odds-on favourite Altior winning a record-equalling 18th successive win over jumps in the Queen Mother Champion Chase.

“We are two small islands living together and we should be co-operating with each other instead of putting sticks and stalls in our way,” said Bailey.

We will have to buy apartments in Bulgaria again

This year’s Cheltenham has been turbulent for Ryanair boss Michael O’Leary. No winners for his Gigginstown stud on day one, a relieved O’Leary became uncharacteristically emotional talking about Tiger Roll after his Grand National winner romped home in the Cross Country Chase.

“He deserves it. He is fantastic. I am going to get all emotional. Leave me alone! Go away!” said O’Leary, choking up, when asked on camera if the four-time Cheltenham winner – which he calls the “family pet” – was a legend.

In the crowd, Irish punters lapped up the victories for O’Leary and Mulryan, savouring their winnings.

“If Sean Mulryan has a winner, then the boom is back!” said a hoarse Jack Fenlon (23) from Wexford at his fourth Cheltenham Festival. “Brian Cowen is back, Bertie Ahern is back, we are all back. AIB shares will be going up!”

“We will have to buy apartments in Bulgaria again,” said his pal Willie Carley, also 23 and on the last of his voice.