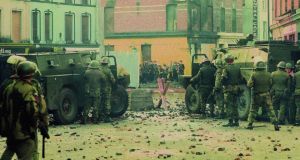 The British ministry of defence has promised to pay for the legal defence of any soldiers prosecuted for the killings on Bloody Sunday, in a move that is being widely interpreted in London and Dublin as a sign that the Northern Ireland Prosecution Service will announce a decision to charge the soldiers on Thursday.

In a letter issued to British army veterans, defence secretary Gavin Williamson promised that the solders would be represented in any prosecutions “entirely at the Ministry of Defence’s expense”. They will be entitled to hire their own solicitors and barristers and instruct them at the department’s expense, he said.

The letter, issued just minutes before the Brexit vote on Tuesday night, says that decision on legal representation would be “not driven by considerations of cost, but of offering veterans the best possible representation”.

While the ministry says that it is committed to helping all former soldiers facing such investigations, British officials have contacted all the Bloody Sunday soldiers under investigation to assure them the state will pay for their legal defence.

The letter goes on to say that the ministry of defence is seeking legislative changes to protect soldiers against prosecution noting that it is “unwaveringly committed to finding ways to give appropriate legal protection to serving and former members of the armed forces in situations where they currently face repeated investigations and potential prosecution following events that happened many years ago”.

The letter also cites the case of the Ballymurphy inquests as an example of where former soldiers can avail of state-funded legal representation.

An announcement will be made on Thursday about whether the soldiers who killed 14 unarmed civilians on Bloody Sunday in Derry in 1972 will be prosecuted.

The Public Prosecution Service in Northern Ireland will announce on Thursday whether or not it will recommend prosecutions against up to 17 soldiers – and two former members of the Official IRA – for their actions on Bloody Sunday in Derry in 1972.

The potential charges faced by the former soldiers include murder, attempted murder and perjury.

The expectation that prosecutions would be announced was heightened when Northern Ireland Secretary Karen Bradley announced in an answer to a parliamentary question at Westminster that security forces personnel convicted of Troubles-related crimes would be eligible for early release.

Ms Bradley also said that the British government would bring forward amendments to legislation to extend the period covered by the early release scheme – introduced after the Belfast Agreement in 1998 – to offences committed in the period before 1973, which would include the Bloody Sunday shootings.

The early release scheme, under which about 500 loyalist and republican paramilitaries were freed from prison, covers offences committed between 1973 and 1998.

If the proposed law is enacted anyone convicted of an offence related to Bloody Sunday, which took place in January 1972, would be covered by the early release scheme.

Last week Ms Bradley apologised amid calls for her resignation, after she said in the House of Commons that killings by soldiers during the Troubles were not crimes.