The families of Bloody Sunday: ‘Any soldier who fired should be charged with murder’ 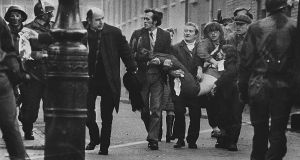 Fr Edward Daly and others run with an injured man on Bloody Sunday in Derry on January 30th, 1972.

On Thursday morning, the relatives of those killed on Bloody Sunday will gather at the memorial in the Bogside to walk together to the city centre where they will learn if the soldiers responsible for the 14 deaths are to face prosecution.

They will carry before them placards bearing the names and faces of their loved ones, and a single word: Justice.

Nine years ago, they made that same walk ahead of the publication of the Saville Report. None of the victims had posed a threat when they were shot, Lord Saville found. Their deaths on January 30th, 1972, were “unjustified and unjustifiable”, said the then British prime minister, David Cameron.

“It’s like a déjà vu of the day before Saville,” says John Kelly, whose 17-year-old brother, Michael, was among those killed on Bloody Sunday.

“It’s been a long wait for this, so naturally we’re nervous, but I think we’re more nervous this time around.

“When we launched the Bloody Sunday Justice Campaign, we had three demands: a full declaration of innocence, the repudiation of Widgery, and the prosecution of those who committed the atrocity and those who planned it. Tomorrow is the third demand. It’s been a long time coming.”

In 2010, as Kelly and other family members emerged into the sunshine on the steps of Derry’s Guildhall, there were cheers as one by one the names of the victims were read out.

Shot in the back

Among those watching was 13-year-old Rossa Ó Dochartaigh. His “Granda Paddy” – 31-year-old father-of-six Patrick Doherty – was one of the last to be killed on Bloody Sunday, shot in the back as he was trying to crawl to safety.

“You could feel the buzz of that day,” says Ó Dochartaigh, “and everyone was cheering and hugging one another.

“I don’t know if I was really old enough to understand, but it was a great day for me because I saw the people that I loved, my family, overcome with emotion.”

The sense of change in the city was palpable; the next morning, Protestant church leaders met their Catholic counterparts – and the Bloody Sunday families – at the memorial in the Bogside.

Among them was the Rev David Latimer of the First Derry Presbyterian Church.

“Often the understanding in unionist or Protestant communities would have been that British soldiers couldn’t have done anything wrong,” he says.

“People had to relearn that history, and the Saville Report, and that great apology from David Cameron, all of that assisted in lifting a cloud from around the city.”

This week, the Bloody Sunday families invited the people of Derry to once again show their support. “Walk with us,” read the headline on the front page of the Derry Journal.

“This is another momentous week for the Bloody Sunday families and the people of Derry who have stood by them over the decades,” said Tony Doherty. Ó Dochartaigh’s father, he was nine years old when his father, Patrick, was killed; he is now chair of the Bloody Sunday Trust.

Today is a “crucial milestone”, he says, “on the families’ road towards justice”.

The majority of families want to see the soldiers prosecuted. “My view is they are all guilty of murder,” says Kelly. “Any soldier who fired a shot that day should be charged with murder.”

“This is about justice,” says Leo Young, whose brother, John, was killed on Bloody Sunday. “Let’s see how far Cameron’s ‘unjustified and unjustifiable’ goes.”

A decision to prosecute will not be without controversy. British army veterans’ representatives and many MPs have claimed there is a “witch hunt” against former soldiers and there have been calls for the introduction of a statute of limitations so former soldiers will not be charged.

This, says Kelly, is part of the significance of Thursday’s decision.

“It’s about justice being served to the victims and their families.

“If there are no prosecutions, then there will never be another prosecution of a British soldier.

Now 22, Ó Dochartaigh works in the Museum of Free Derry and spends his days telling visitors and school pupils about his grandfather.

“It feels like there’s a weight on my shoulders, as if I have a responsibility that I have to do something about what happened on Bloody Sunday,” he says.