Bloody Sunday: Former British soldier to be charged over killings

One former British soldier is to be charged over the Bloody Sunday killings, the North’s Public Prosecution Service (PPS) announced in Derry. Video: Reuters 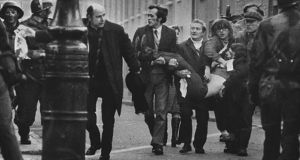 Fr Edward Daly and others run with an injured man on Bloody Sunday in Derry on January 30th, 1972

The Bloody Sunday families have vowed to continue their campaign for justice after it was announced that only one former British paratrooper is to be prosecuted over the shootings in Derry on January 30th 1972 which resulted in 14 deaths.

The families said they were “disappointed” that a lance corporal known by his pseudonym Soldier F is to face prosecution for two alleged murders and four attempted murders, while 16 other former soldiers would not face trial.

Soldier F is to be prosecuted for the murder of James Wray and William McKinney and for the attempted murders of Joseph Friel, Michael Quinn, Joe Mahon and Patrick O’Donnell, the North’s Public Prosecution Service (PPS) said.

Lord Saville in his 2010 report into Bloody Sunday, which found that all the victims were innocent and posed no threat on the day, linked Soldier F to five killings and a number of woundings. In addition to the killings of Mr Wray and Mr McKinney Lord Saville connected him to the shootings of Michael Kelly, Bernard “Barney” McGuigan and Patrick Doherty.

While deflated by the PPS’s decision to prosecute just one soldier, the famlies described the announcement as a further step on the road to justice.

Alana Burke, who was badly injured when she was run over by an Army vehicle on Bloody Sunday, said: “This announcement is vindication of our decades-long campaign to clear the names of our loved ones and to bring those responsible for their deaths and injuries to justice,”

Mickey McKinney, who is set to see Soldier F in court over the murder of his brother Willie, said: “For us here today it is important to point out that justice for one family is justice for all of us.”

The North’s director of public prosecutions Stephen Herron with PPS colleagues told the families of the decision at the City Hotel in Derry on Thursday morning, while directly thereafter Soldier F and his legal representatives were told he would be prosecuted.

The PPS said that “in respect of the other 18 suspects, including 16 former soldiers and two alleged Official IRA members it has been concluded that the available evidence is insufficient to provide a reasonable prospect of conviction”.

Mr Herron said the PPS recognised “the deep disappointment” of the families and added, “As prosecutors we are required to be wholly objective in our approach. However this does not mean that we do not have compassion for all those who are affected by our decisions.”

The British Ministry of Defence has promised to pay all the legal costs of Soldier F. British defence secretary Gavin Williamson said his department was working to “drive through a new package of safeguards to ensure our armed forces are not unfairly treated”.

“And the government will urgently reform the system for dealing with legacy issues. Our serving and former personnel cannot live in constant fear of prosecution,” he added.

Solicitors acting for the family of William Nash, who was killed on Bloody Sunday, contacted the Northern Ireland attorney general John Larkin, QC, contending that these comments may have jeopardised the chances of a fair trial of Soldier F. They argued that the remarks may amount to a contempt of court.

The Northern secretary Karen Bradley said the British government was “indebted to those who sought to bring peace to Northern Ireland” while adding she had the “deepest sympathy for the suffering of the families of those who were killed on Bloody Sunday and all those who lost loved ones during the Troubles”.

Ms Bradley said that everyone agreed that the methods for dealing with the past must be reformed. “We need to get the institutions to investigate the past set up quickly and completed as soon as possible,” she added. “We will set out how we intend to move forward shortly.”

Sinn Féin’s northern leader Michelle O’Neill said the “strength and remarkable achievements” of the Bloody Sunday families was a “source of hope for so many still fighting for truth and justice”.

The DUP East Derry MP Gregory Campbell said that there was a “disproportionate focus on the small proportion of the 10 per cent of deaths attributed to those serving their country” and that Lord Saville in his report ignored some of the events in Derry in the days leading up to Bloody Sunday including the IRA murder of two RUC officers Sergeant Peter Gilgun and Constable David Montgomery.

The PPS took its decision after considering an estimated 125,000 pages of material relating to Bloody Sunday.

That material included the 5,000-page report of Lord Saville’s inquiry into Bloody Sunday published in 2010.

It also included oral evidence and statements from almost 2,000 witnesses who gave evidence over the 435 days of the inquiry that, all told, amounted to more than 100,000 pages of material. It also included investigation files consisting of 668 witness statements and numerous physical exhibits such as photogaphs, videos and audio material.

Lord Widgery’s 1972 report into Bloody Sunday that said British soldiers were fired on first and that some of those killed had been armed also was part of that material. Nationalists and many others portrayed the Widgery report as a “whitewash”.

Although the PPS considered Lord Saville’s material, it was prohibited from citing any of that material as evidence. Instead it had to make its own case based on the PSNI investigation and its evaluation of the evidence.

The PPS is the principal prosecuting authority for Northern Ireland. According to its stated remit “it is independent of the British government, the PSNI and all other agencies when carrying out its functions – no-one can make the PPS prosecute a particular case, nor stop it from doing so”.

Although the early release scheme of the Belfast Agreement does not pertain to the period before 1973, Northern Secretary Karen Bradley this week indicated legislation would be introduced to retrospectively apply it from a new start date of January 1968, and that it also would relate to former members of the British security forces.

Ireland facing tough Covid-19 restrictions for first six months of 2021, says Taoiseach 11:46
Badge of distinction: Meet the first Sikh in the Garda Reserves 10:45
‘I’ve yet to meet a homeless woman who hasn’t been raped’: Campaigners seek to establish refuge for those assaulted on streets 10:15
Snow for many areas as yellow weather alert in place for entire country 09:58
Juvenile to appear in court over serious assault on woman in Dublin city 08:13