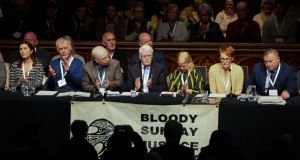 All the families who lost loved ones on Bloody Sunday “deserve effective investigations into killings that took place”, the Government has said.

In a statement responding to the decision by the North’s Public Prosecution Service (PPS) to charge just one soldier out of 17 against whom charges were considered, the Department of Foreign Affairs said it was in contact with affected families on behalf of the Government.

“All victims’ families deserve, and must have access to, effective investigations into killings that took place, and have the opportunity to find justice in accordance with the law and regardless of the perpetrator,” it said.

Mr Williamson said the ministry of defence would fund all the accused man’s legal costs.

“We are indebted to those soldiers who served with courage and distinction to bring peace to Northern Ireland. The welfare of our former service personnel is of the utmost importance and we will offer full legal and pastoral support to the individual affected by today’s decision. This includes funding all his legal costs and providing welfare support,” he said.

“The ministry of defence is working across government to drive through a new package of safeguards to ensure our armed forces are not unfairly treated. And the government will urgently reform the system for dealing with legacy issues. Our serving and former personnel cannot live in constant fear of prosecution.”

The DUP’s Gregory Campbell used a point of order in the House of Commons to ask why there had been no investigation into the killing of police officers in Derry shortly before Bloody Sunday. He said there was a “massive imbalance” in legacy investigations into the Troubles.

Conservative MP Johnny Mercer, a former army officer, described the decision to prosecute the former soldier as “an abject failure to govern and legislate” on the watch of a Conservative government.

British veterans said the decision to prosecute the former paratrooper identified as Soldier F was “one soldier too many” and claimed the move was about “appeasing” the IRA and Sinn Féin.

Former Grenadier Guard Alan Barry (54), who founded the Justice for Northern Ireland Veterans group, said Soldier F was being thrown “under a bus”.

“No soldier should be charged. It happened 47 years ago, a line in the sand needs to be drawn and people need to move on,” he said.

“Does this really get us any where?” he asked on RTÉ radio’s News at One.

He pointed out that of 2,000 cases investigated there had been just 17 prosecutions and only three convictions. He said the victims and their families deserved justice.

“There are lots of vested interests in this. You cannot have the defence secretary and Boris Johnson saying it is wrong to prosecute soldiers, but that others could be prosecuted. It has to be done in an even-handed way.”

Mr Hain pointed out that security forces would have better records than paramilitaries so it would be difficult to be even-handed.

Writing in The Daily Telegraph last week, Mr Johnson said: “What kind of a world is it where we can put former squaddies in the dock for murder, and simultaneously tell IRA killers that they can get away with it?”

Former Foyle MP, Mark Durkan, said that nobody should consider themselves immune from prosecutions in Troubles-related cases.

“It does not mean that there will always be sufficient evidence for prosecutions, but there can be no sense of indemnity conferred on anyone,” he said.

Labour leader Brendan Howlin called on the British government to go further than prime minister David Cameron’s statement in 2010 and issue a formal apology “for the unjustifiable actions carried out by agents of the British state – and to apologise for its years of inaction”.

Mr Howlin added the PPS’s decision must be respected. It would have been “cruel” to give families the hope of a trial if there was not enough evidence to proceed.