Minister says he wants FAI council, which elects most of board, to be cleared out 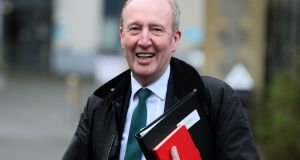 ‘Undoubtedly there is a big question to be asked about the council and the control they have,” Minister for Sport Shane ross said, adding that the clearout of the FAI board ‘is a great first step’. Photograph: Brian Lawless/PA Wire

The Government will demand further governance reforms at the Football Association of Ireland (FAI) in exchange for any financial support for the organisation, Minister for Sport Shane Ross has said.

Speaking in advance of crisis talks to be held on Tuesday with European football’s governing body over the future of the FAI, Mr Ross told The Irish Times he wanted the powerful FAI council, which elects most of the board, to be reformed and cleared out.

Any moves to reform the council could face resistance from the grassroots clubs and leagues of Irish football, which elect the council. However, Mr Ross is adamant that financial support of the FAI would be conditional on further reform. The council was key to former chief executive John Delaney’s power base, with his patronage of the grassroots game seen as key to maintaining his control over the FAI for more than a decade.

Mr Ross’s comments came on the eve of talks with a high-powered Uefa delegation on the future of the FAI, which observers hope could go some way to establishing the parameters of a deal to save the association.

The Irish Times has learned that among the travelling contingent will be Uefa’s general secretary Theodore Theodoridis, as well as the organisation’s financial director Josef Koller. The director of national associations Zoran Lakovic will be joined by his deputy, Thierry Favre.

Uefa would not confirm the names of the travelling group, which will meet Minister for Sport Shane Ross, Minister of State Brendan Griffin, and separately the FAI.

While Mr Ross warned that he did not want to stoke expectations in advance of the meeting, and reiterated that he would not reward wrongdoing at the FAI, he said, “I’m hopeful it will lead to further reforms and a solution”.

Sources on the Government side said there is a growing realisation that some form of payment from the State towards supporting football in Ireland will have to be made in order to preserve the future of the game, but emphasised that there is a difference between supporting the game and supporting the FAI in its current corporate structure.

However, a straight State bailout is unlikely, with an enhanced package of soft loans, grants, accelerated payments of monies due, guarantees and potential asset disposals under consideration. This could lead to facilities partially controlled by the FAI, for example the Athletic Union League (AUL) complex in Clonshague, being made available for use by non-football organisations in exchange for enhanced grant support.

Uefa is believed to be deeply concerned by the rift between the Government and the FAI, and wary of stepping up its support for the association in the absence of a normalisation of relations between the State and the football body.