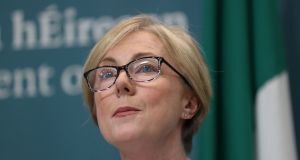 Free hot school meals are to be provided to a further 35,000 children from September, the Minister for Social Protection will announce on Tuesday.

Regina Doherty is to extend the programme, currently operating as a pilot in 37 schools and benefiting 6,600 children, once she has secured approval at Tuesday’s Cabinet meeting. The department will invite schools to apply for the scheme in coming weeks.

The Minister has said it is her wish that all primary school children, regardless of income bracket, would eventually get a hot meal daily at school.

The provision of a healthy meal to all children as an anti-poverty measure has been widely praised by children’s rights advocates. The pilot, which began last September, was significantly oversubscribed when expressions of interest were invited.

Ms Doherty told The Irish Times she was delighted to be extending the scheme “from almost 7,000 currently participating in the pilot to up to 42,000 involved in the extended scheme by September.

“The first indications from this pilot project are so positive – demonstrating that a hot school meal is not just nutritious but also guarantees a better education.

“The insights we continue to gather from the experiences of children and teachers involved in the pilot will help inform future policy in this area. I, for one, would be keen to expand the scheme as far as possible and I look forward to the final assessment of the pilot programme.”

The current pilot built on the experience of the “proof-of-concept” project running at Our Lady of Lourdes National School in Inchicore, Dublin 8, since the beginning of 2019.

Almost 250 pupils attending the Deis school benefit. Principal Tonya Hanley, some weeks after the scheme began, said for some children it was the only hot meal they might get during a day. She said the scheme had widened some children’s diets, introducing them to flavours and textures they might not have tried before.

In its assessment of the pilot, the department reported over the weekend: “Benefits . . . include increased social skills through eating together and involvement by older pupils in distributing meals, the opportunity to try new foods, a change in eating habits from fast and unhealthy foods, guarantee of a hot meal during the day.

“Suppliers, whether national or local, were credited with helping in the smooth rollout of the pilot, displaying flexibility and consultation in their approach. Likewise, principals paid tribute to their teaching staff.”