Storm Brendan moving off – but wind and flooding hazard remains

Some homes will be without power overnight as ESB restores power to 100,000 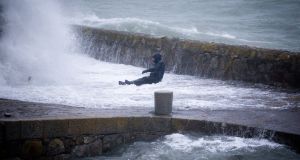 Some homes will be without power overnight as the ESB continues to restore power in the aftermath of Storm Brendan.

Met Éireann says  a risk remains of strong winds and coastal flooding as Storm Brendan tracks away from Ireland leaving more than 32,000 without power and trees down countrywide.

An orange-level wind warning with gusts of up to 130km/h in exposed areas was extended until midnight in Donegal, Galway, Leitrim, Mayo and Sligo. A status yellow wind warning is in place for 10 other counties.

There is concern about flooding during the evening high tide in counties Galway, Clare, Mayo, Sligo, Donegal and Kerry.

The ESB has restored power to 100,000 homes, farms and businesses over the course of Monday. Power cuts were were reported across the country with Galway, Limerick, Kerry, Cork and Donegal, among the worst affected areas.

Winds started to ease along the west coast in the early afternoon although a second belt of strong gusts is forecast in the region this evening.

In Howth the Coast Guard said it had “investigated reports of people putting themselves at risk during Storm Brendan” and spoke to multiple people around the harbour and seafront between Howth and Clontarf. Video footage and photographs show waves crashing over the walls along Dublin bay in Clontarf, Howth and Colimore Harbour in Dalkey as well as people standing near large waves .

Storm Brendan made landfall on Monday morning bringing gusts of almost 100km/h over northeast counties and more than 140km/h off the coast of west Cork.

The powerful winds have brought down trees and blown debris on to roads making conditions difficult. Three trampolines were blown on to motorways on Monday, two on the the M7 near the University of Limerick and near Oola in Co Tipperary and the third near Junction 9 on the M9. These have since been cleared.

The ESB said its crews have restored power to more than 100,000 homes, farms and businesses over the course of Monday with 32,000 without power supply as of 6pm. At its peak, 50,000 ESB customers were without supply.

“High winds during daylight hours have hampered restoration efforts and have also caused further losses in supply. We expect the majority of those without power at the moment to have supply restored tonight, though some families will be without power overnight. High winds expected in the west and northwest this evening, so further cuts are possible.

The damage is mainly due to to fallen trees on overhead lines as a result of the high winds, said the ESB.

The ESB has also urged the public not to approach or touch fallen trees, wires or damaged electricity networks as they may be hazardous.

Real-time information on power cuts and restoration times is available on the PowerCheck App or www.esb.ie/esb-networks/powercheck/

Motorists and road users are being advised to exercise caution due to debris on routes while cyclists are advised to avoid unnecessary journeys while the orange wind warning is in place.

Irish Ferries has not cancelled any Dublin-Holyhead sailings. However the Dublin to Holyhead 2.30pm service was delayed due to adverse weather conditions. Stena Line crossings have also been delayed.

In Cork, the cross-river ferry service was suspended due to high winds while passengers travelling in the Cobh-Passage West area were advised to allow extra time for their journeys.

In west Cork, the Cape Clear and Sherkin Island ferries were cancelled with winds hitting gale force eight and nine.

In Mayo the Belmullet-Blacksod Road (R313) was closed from 10am on Monday.

Gardaí at Anglesea Street station in Cork city urged people to avoid travelling following reports of 20 fallen trees around the county. Despite heavy rain, there were few reports of flooding across Cork.

The Dursey Cable Car at the top of the Beara Peninsula has also been closed.

Cork Airport reported no major impact from the storm with all scheduled departures leaving on time, while Dublin Airport said all airlines had indicated they would carry out a normal schedule.

However, Shannon Airport reported several cancellations including flights to and from Birmingham and London Heathrow while flights from Manchester and London Stansted were diverted to Cork.

National director of the directorate for fire and emergency management Seán Hogan told RTÉ that road conditions on Monday would be dangerous due to fallen power lines and trees.

While high tide in Galway passed without any significant flooding, Galway City Council advised the public to exercise extreme caution in shore areas and to follow the Coast Guard advice to “stay high, stay back, stay safe”.

Sections of the sea front at Salthill promenade have been closed and an enforced boom at Spanish Arch was “very effective”, said Mr Hogan.

The National Parks and Wildlife Services advised the public not to visit any national parks, particularly Killarney National Park, as well as national monuments or nature reserves while warnings are in place.

In advance of the storm car parks were closed and flood defences put in place in Clontarf, Sandymount and along parts of the Dodder river.

Further high tides are expected at 2pm on Tuesday, according to a DCC spokesman. “Dublin City Council will continue to monitor and take necessary action over the coming days,” he said.

A status orange marine warning is also in place.