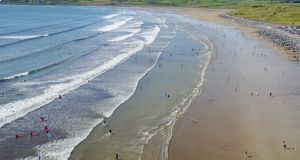 Fran Harding got into trouble while swimming off Lahinch beach at about 10.40am. Photograph: Google Maps

A man who died after getting into difficulty while swimming off Lahinch, Co Clare, on Sunday morning had lost his son in a double drowning tragedy two years ago.

Fran Harding, aged in his 40s, was the father of 15-year-old Shay Maloney who died alongside his friend Jack Kenneally in a disused quarry on the outskirts of Ennis in May 2018.

Emergency services received several calls warning that Mr Harding was in trouble while swimming off Lahinch beach, which is popular with surfers, at about 10.40am.

Shannon-based search and rescue helicopter Rescue 115 arrived at the scene shortly before 11am and lifted the man from the water.

The helicopter landed Mr Harding on the beach where attempts to resuscitate him began with assistance from the National Ambulance Service.

A short time later, he was returned to the helicopter and flown to University Hospital Limerick. A Garda spokeswoman said he was pronounced dead at the Limerick hospital on Sunday afternoon.

A spokesman for the Coast Guard said that its nearby Doolin and Kilkee units were alerted and that the Aran Islands RNLI lifeboat was sent to the incident.

Éire Óg Inis GAA paid tribute to Mr Harding on Monday: “The Tipperary native hurled for two years with our Junior B team after moving to Clare.”

Fine Gael Senator Martin Conway described Mr Harding as “a gentleman and always so helpful on the many occasions our path met”.

“Profound sadness across the county yesterday afternoon as we learned of the tragic drowning of Fran Harding at Lahinch,” he said. “Our thoughts and prayers are with his family, friends and the community.”

Coronavirus: Further 430 cases reported in State is most in a day since April 18:57
UCC students face expulsion if they breach Covid-19 guidelines 18:20
Post mortem on man who died in Navan expected to confirm hit and run 18:07
Hospitality industry suffers another blow as New Year’s Eve festival is cancelled 17:23
More than 30 people queue overnight to secure property in Carlow 17:00

1 More than 30 people queue overnight to secure property in Carlow
2 Coronavirus: Further 430 cases reported in State is most in a day since April
3 Man with electric scooter who died in Meath was due to get married in the coming weeks
4 Gardaí appeal for information on rape of teenager in Co Mayo playground
5 Traffic volumes show Donegal locking down to greater extent than Dublin
Real news has value SUBSCRIBE