Stormont reboot, but no specific financial commitment from Johnson 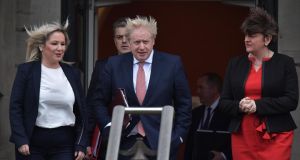 Stormont’s resumption of full business was buttressed on Monday by the arrival of Taoiseach Leo Varadkar and British prime minister Boris Johnson to more or less seal the deal.

They put their stamp of authority on the New Decade, New Approach agreement signed off on by Tánaiste Simon Coveney and Northern Secretary Julian Smith late on Thursday night.

As with a lot of action surrounding the British prime minister, it was a bit chaotic at times at Stormont on Monday, but Varadkar and Johnson, with his hair nicely ruffled by Storm Brendan, met Arlene Foster and Michelle O’Neill and the other Executive Ministers.

Nothing like a reheated quote to try to nail the importance of the day, and Johnson chose a take on Tony Blair’s “hand of history” line when almost 22 years ago the then Labour prime minister arrived in Northern Ireland to help get the Belfast Agreement over the line.

“Never mind the hand of history on my shoulder, I see the hand of the future beckoning us all forward,” said Johnson.

That was rather lazy, and classics scholar Johnson or one of his script writers might have done better. Yet again with some understatement it made the point that having the powersharing institutions up and running again after 36 months was a big moment.

Varadkar, with a general election on his mind, spoke of how pleased he was the “visionary” Belfast Agreement was back in place. Now he can concentrate on that other business.

Johnson congratulated all those involved in achieving the deal, including his Northern Secretary Julian Smith.

There have been rumours that Smith could be for the chop in the next British cabinet reshuffle, but Johnson said he had “done a great job, and he certainly has a bright future”.

Yet similar lines have been said about doomed Premiership football managers.

Still, both Smith and Coveney, who was also at Stormont on Monday, have impressed, and at the least it would seem ungracious if the Northern Secretary lost his job after such a success.

Johnson was rather coy on the question of funding to deal with a raft of problems such as the health crisis, industrial action by nurses, health workers and teachers, getting public services fully functioning and improving infrastructure, as promised in the deal.

A figure of £2 billion (€2.3bn) has been mentioned, but Johnson gave no specific financial commitment apart from promising the British government would be “supportive”.

And he added: “It’s not just about money, it’s about leadership, and what’s so great about today is, as I say, that Northern Ireland politicians have put aside their differences, stepped up to the plate and shown leadership, and that is a fine thing and the right thing.”

Colour of his money

However, the new Sinn Féin Minister for Finance, Conor Murphy, wants to see the colour of his money. Putting the pressure back on Johnson, he said £2 billion would not be enough, while Foster said the Executive would hold Johnson “to his word” to deliver.

Meanwhile, Stormont is getting to be a busier, livelier place again as the cobwebs are blown off the machines of government. Civil servants and special advisers we had not been seen in years were making themselves known again; press releases were being fired out to journalists from the refunctioning departments; security staff looked as if they now had something to do.

There were no big rows to report, although the SDLP felt hard done by that their Mid-Ulster MLA Patsy McGlone did not get the speaker post.

Certainly the word last week was that McGlone, a Gaeilgeoir who has the capacity not to ruffle unionist feathers over his use of Irish, had the job, but instead on Saturday we learned that the new speaker would be Sinn Féin’s Alex Maskey.

There were mutterings about the “new decade, new carve-up” between the DUP and Sinn Féin, but any ill-feeling wasn’t sufficient to halt the Stormont reboot. And with Varadkar and Johnson endorsing the progress to date, it remains a case of so far so good.