‘Questions over whether he is completely in charge of his faculties’ 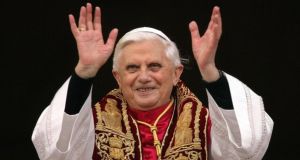 Benedict, when he was pope, in 2005. Photograph: Reuters/Max Rossi

There has been strong reaction from Irish Catholic priests to the intervention of former pope Benedict XVI in the Church’s ongoing celibacy debate.

In a new book From the Depths of Our Hearts,written with conservative Cardinal Robert Sarah, the former pope forcefully defends mandatory celibacy for priests in what appears to be a strategically timed interjection aimed at putting pressure on Pope Francis not to change the church’s centuries-old rule on celibacy for priests.

The book is to be published on Wednesday but excerpts were released last Sunday to the website of French newspaper Le Figaro.

Last October a synod of bishops from the Amazon region of South America recommended that married men in that remote area be ordained priests. Pope Francis is expected to respond to that recommendation in coming weeks.

Commenting on Benedict’s intervention Fr Brendan Hoban of the Association of Catholic Priests described it as “an extraordinary turn of events whereby Benedict finds himself doing what he is doing. He is challenging the Pope. This from a man who had been very strong on obedience, order and discipline. He seems to be doing and saying things he opposed in the past.”

But, Fr Hoban said, “there are questions over whether he is completely in charge of his faculties. Clearly he is being manipulated. In the past he would have criticised liberals in the church for doing the same things he has done now.”

Redemptorist priest Fr Gerry Moloney described the intervention by Benedict as “both dangerous and unprecedented.”

By speaking out publicly “on such a divisive and sensitive topic as mandatory celibacy, he has placed Pope Francis in an awkward position. Benedict is encouraging dissent. He is widening the divisions in the church. He is increasing the possibility of schism,” said Fr Moloney said in his blog From my Pulpit.

He noted how “in the past, those who dared criticise Benedict or his predecessor were summarily dealt with, told to desist, effectively silenced. Some are still being punished. Many of those who tolerated no criticism of the Pope or the institutional church when John Paul II and Benedict were in office, now have no problem in openly attacking Pope Francis,” he said.

Fr Moloney believed that, on retirement, “Benedict should have left the city of Rome and withdrawn to a monastery or retirement home in his native Germany. He should not have remained in the Vatican. ” He should have known “that Francis’s enemies would use him as a weapon, a figure to rally round, in their battle to prevent any real change in the church.”

Vatican director of communications Andrea Tornielli, in reference to the new book, has pointed out that “priestly celibacy is not, and has never been, a dogma [of the Catholic Church].”

In a editorial on the Vatican News website, he added: “The Catholic Eastern-Rite Churches allow the possibility of ordaining married men as priests. Exceptions have also been admitted in the Latin Church by Benedict XVI himself in the Apostolic Constitution ‘Anglicanorum coetibus’, dedicated to Anglican priests who seek communion with the Catholic Church. ”

This was a reference to the “personal prelature” set up in 2009 by Benedict for married Anglican priests unable to accept women’s ordination.