Taxi driver struck twice in back in Drogheda shooting 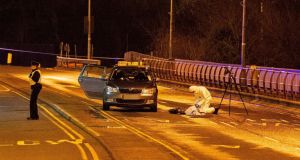 Taxi at the scene of shooting, Bridge of Peace, Drogheda. Photograph: Ciara Wilkinson

A taxi driver injured in a shooting in Drogheda, Co Louth on Monday evening is understood to have been struck twice in the back.

The man, understood to be in his late 30s, was thought to have been an unintended victim of the attack, one local source said.

He was in his taxi when he was shot from a passing car, which fled the scene at a busy time of day in a central area of the town.

He was taken by ambulance to Our Lady of Lourdes Hospital following the shooting which happened shortly after 6.20pm. His injuries are not thought to be life-threatening, according to a Garda spokesman.

The taxi remained at the scene on Monday night at the Bridge of Peace, the main bridge across the Boyne in the town centre.

The bridge overlooks Drogheda Garda station and it is believed that gardaí were quickly on the scene. There are unconfirmed reports that a passenger in the car ran from the scene possibly in the direction of the Garda station.

Gardaí will investigate if it is connected to the ongoing feud in the area. The intended target may have been a key figure in the Drogheda feud.

The Mayor of Drogheda condemned the shooting saying it was “reckless, dangerous and a cowardly act.”

Cllr Paul Bell said it took place in traffic at a time when, “people were going about their daily business, there was also a lot of pedestrians”.

The taxi driver lives in Co Meath nearby and local Cllr Sharon Keogan, who said she knows his family, said “the Minister of Justice must put the resources into drug crime in this country”.

“A multi-agency approach must be adopted here. It is not right that some of us law-abiding citizens are subjected to the rules of law and those involved in blatant criminal activity are not.

“It’s time we really took this serious, when innocent hard-working people going about their daily work are getting shot,” she added.

Chairman of Meath County Council Wayne Harding said he knows of the taxi driver’s family and they are “a quiet, unassuming family”.

“It is getting close to somebody completely innocent losing their life because of what is going on. It is appallingly shocking,” he said.

Louth TD Fergus O’Dowd said the latest shooting was “very concerning” but he praised the work of an Garda Síochána, including the additional 25 gardaí and the armed Emergency Response Unit assigned to the town last year by the Garda Commissioner Drew Harris in response to the feud.

“The Garda cannot be everywhere all of the time and it would be hugely important if anybody who can help gardaí and give any information to help them apprehend who ever committed this act,” said the Fine Gael TD.

Labour senator Ged Nash, a former Louth county councillor for the Drogheda area, condemned the latest shooting in the town as a “dreadful occurrence.” He said he suspected that the shooting was linked to the feud between local gangs.

“There was a sense over the last couple of months that a lid was being kept on this particularly bitter feud but I spoke to local gardaí who are working day and night to try and quell this, and I was told that while there had been no active shootings, these people are still trying to take each other out,” he said.

“This feud is alive and well in Drogheda. Now it is of the utmost importance that the policing resources that were secured for the town will be retained. This violence doesn’t reflect who we are or the reality of this town. This is a small minority hell bent on wiping each other out.”