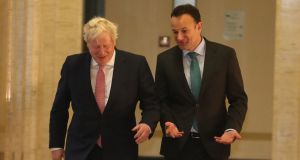 The restoration of the Northern institutions has been a “really good day for Ireland and the United Kingdom”, Taoiseach Leo Varadkar has said.

Mr Varadkar and British prime minister Boris Johnson met in Stormont on Monday to discuss the prospects for Northern Ireland following the weekend’s political breakthrough after three years of deadlock.

Mr Johnson said it was a “moment of hope” for Northern Ireland.

He emphasised the union in his opening remarks: “We want to ensure that we deliver on [our] potential through better infrastructure, better education and of course technology.

“And using those three things to bring our whole United Kingdom together, so that all four nations of the UK, above all Northern Ireland, benefit from the prosperity and the growth that we intend to deliver.”

The two leaders, along with Tánaiste Simon Coveney and Northern Secretary of State Julian Smith, met for 30 minutes. Then Mr Varadkar and Mr Johnson met the First Ministers and Executive over the following hour.

In a separate press conference following their meeting, Mr Varadkar and Mr Johnson emphasised the potential for growth and prosperity in the North.

“The Good Friday Agreement is back up and running again with power-sharing here in Northern Ireland,” said Mr Varadkar.

Hinting at his imminent announcement of a general election in the Republic, he added: “I look forward to North-South ministerial meetings as soon as we have a new government in place south of the border.”

For his part Mr Johnson said Monday was a day of real opportunity. “It is great to see the leaders taking their responsibility and prepared to take Northern Ireland forward,” he said.

The Taoiseach said his meeting with Mr Johnson had focused a lot on east-west co-operation including improving the infrastructure between both jurisdictions.

“[We spoke] about the new relationship we are going to build between us, and between the UK and the EU.”

The new deal pledges substantial funding to support the new Executive so that it can deal with immediate issues such as the health workers’ strike, industrial action by teachers and the general health crisis.

There has been speculation that the British government would provide additional funding of £2 billion (€2.3 billion) but Mr Johnson, when queried, would not specifically say how much was on offer.

He said he wanted to build on the “potential” of Northern Ireland. He said the British government was making “huge commitments” to Northern Ireland but would not say how much that might be in actual additional funding.

“We are listening very carefully and we will certainly do everything that we can to support [public services],” he said.

Asked about the calamitous renewable heat incentive (RHI) scheme – the report on the scheme is due shortly – Mr Johnson said it was vital in future that “public spending is properly invigilated”.

And on Brexit and the prospect of checks on goods coming from Britain to Northern Ireland, Mr Johnson insisted there would be no checks, while also allowing that goods further destined for the Republic could face some procedures.

Mr Johnson commended Mr Smith for the work he did with Mr Coveney in striking the deal with the parties.

Both leaders agreed that the issue of prosecuting British armed forces for legacy killings remained an unresolved issue. Mr Johnson repeated his party’s manifesto commitment not to prosecute soldiers when there was no new evidence. Mr Varadkar said it was a difficult issue.

“There are divided opinions,” he said, adding they could be resolved if all five parties worked together.