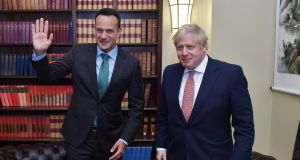 The status orange weather warning was justified. On Stormont Hill in east Belfast we were exposed to the full blast of Storm Boris as it blustered fiercely around us.

Nearby, Taoiseach Leo Varadkar stood leaning into the hyperbole, doing his best to be heard above the roaring gusts. You wonder was it wise for him to have travelled to the North without including Met Éireann’s Evelyn Cusack among his special advisers.

When Storm Boris is in full flow even Storm Brendan is put in the shade. The British prime minister, with his trademark tousled blond mane, has a knack of drawing all the publicity. In his company it’s hard for Leo – no slouch when it comes to projecting his profile – to attain parity of self-esteem.

There could only be one main act and it was Boris. He even put in two separate appearances, a solo and then an encore with Leo.

He reworked Tony Blair’s famous line from the day the Belfast Agreement was signed in 1998. “Never mind the hand of history on my shoulder, I see the hand of the future beckoning us all forward,” he declared.

Braving Storm Brendan to travel to Belfast to acknowledge the restoration of the Assembly and Executive was a necessary journey, although overcoming Storm Boris always seemed an unobtainable goal.

Still, the Taoiseach did not seem to mind second billing. After all, he is very close to calling an election. What better way to adorn the curriculum vitae than to seal a deal on the northern deadlock and burnish his reputation as a statesman, and Simon Coveney’s too, with a double whammy of a reinvigorated Belfast Agreement and a smooth Brexit to sell to the electorate.

In a really short press opportunity where only two questions were allowed, he did take the opportunity to make another election announcement non-announcement.

He said the North-South Ministerial Council would meet as soon as there was a new government south of the Border. In other words, an election will be called in the next few days.

At least we should be thankful that for once the raging storm at Stormont was meteorological rather than political. Inside the great hall the atmosphere was balmy and the outlook was sunny, with everyone making positive noises.

Except for Johnson’s press team, that is, who harangued the media for having the gall to be present in such numbers and corralled them tightly into a corner that made a telephone box seem spacious.

Sinn Féin’s Conor Murphy, the new Stormont finance minister, did complain that Johnson had yet to specify the actual amount his government will give to the North. Murphy said it would need to be much more than £2 billion (€2.33 billion), but despite the expansive prose Johnson wasn’t prepared to say how much cash he’d flash for the era after cash-for-ash.

Johnson himself was, well, as he always is. He gesticulated fiercely with his hands in the air, seemed to be struggling for breath and then boomed out his key phrases for maximum effect.

There was one subject on which Boris was uncharacteristically coy though. Asked about the fallout over the royal family’s “Megxit” controversy, he quietly declined to respond, saying he never spoke about “royal stuff”.

And then suddenly, without warning, Storm Boris had blown itself out and was gone.