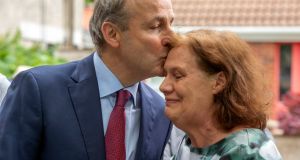 They may not have been gathering tar barrels as they did in Blackpool when Jack Lynch returned in triumph after his landslide 1977 general election win, but the people of Ballinlough more than held their own when they turned out to welcome home Cork’s second ever Taoiseach, Micheál Martin.

Around 100 people lined the entrance into Silver Manor - the small, leafy cul-de sac estate at the end of the Ballinlough Road – where the Taoiseach and his wife Mary have lived since 1990. Their children Micheál Aodh, Aoibhe and Cillian were there with Mary to welcome him.

Mr Martin stopped the state car on the Ballinlough Road so he could get out and meet the many well wishers from a safe social distance. The whole crowd was soon singing the Cork anthem.

There were emotional scenes as Mary, their two sons and daughter waited patiently outside their home to hug the man who, when he waved goodbye to them last weekend to head for Dublin, did not know whether or not he would achieve his long held ambition to lead his country.

Composing himself, Mr Martin recalled how they had moved into one of the last two houses in the estate, remarking at the time that it was smack dab in the middle of his Cork South Central constituency and not far from Turners Cross where he had grown up.

“I want to thank my neighbours because we had a lovely friendship here since we came here 30 years ago – it’s been a great oasis for me and it’s wonderful to meet all of those people who worked long and hard for me over the years, shared the ups and the downs,” he said.

Mary acknowledged it had been difficult for her and their children not to be at the National Convention Centre on Saturday to see her husband elected Taoiseach but part of her was glad the Covid-19 regulations had prevented her from travelling as she found it emotional just watching on TV.

“One side of me was glad I was able to watch it all from the privacy of my own home because it was quite emotional – we’re just thrilled and will do all we can to help Micheál,” said Mary who met her future husband in the Donagh O Malley Fianna Fáil Cumman in UCC in the 1980s.

Mr Martin too was in reflective mood when asked how his late father, Paddy, a CIÉ bus driver, champion boxer and footballing teammate of Cork’s only other taoiseach, Jack Lynch , would feel at seeing his son elected Ireland’s 15th holder of that office.

“I think he would be quietly proud – we were brought up not to use the word ‘proud’, the mother didn’t like it but he would be a happy man – he was a kind of proud Irishman and he loved his country and right through my career, he was there – very sound, a wise fellow with good judgement.

“My parents came through very tough times and they wanted to raise us and give us an education and I think that resilience is there somewhere to keep going – we all come through – we have one life and we have to live it to the fullest and I think that’s the philosophy that he imparted to me.”