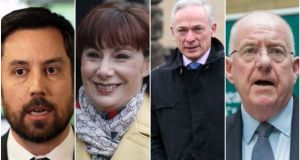 Fine Gael leader and Tánaiste Leo Varadkar said his new team of seven senior Ministers met on Saturday afternoon and “it seemed like the room was empty.”

He said the historic weekend was “tinged with real sadness to see so many friends and colleagues leave office”.

High-profile political casualties included Richard Bruton who is the outgoing minister for communications and climate action. In recent times he was instrumental in helping the three parties get the programme for government deal over the line and there was some surprise in political circles that he had not been given a senior ministry this time around.

Bowing out of Cabinet, Mr Bruton said he had the “privilege to serve under four taoisigh - Garret, John, Enda and Leo. We have helped deliver huge changes in Irish society during that time and there is still so much more for the 33rd Dáil to achieve”.

Laois-Offaly TD Charlie Flanagan, who had served as minister for justice since the appointment of Leo Varadkar as taoiseach in 2017, also lost out on a Cabinet role. He was replaced in the post by Meath East TD Helen McEntee who served as minister of state for European affairs in the last government.

Former minister for culture Josepha Madigan has also lost out but it is understood that she will be given a junior ministry. The names of the new ministers of state are expected to be announced early next week.

Dublin Bay South TD Eoghan Murphy lost his job as minister for housing and he is not expected to get the nod for a junior role either. It is anticipated he will instead take up a position which will link the party organisation and the parliamentary party. Mr Murphy’s role had proven controversial in recent years as the crisis in housing and homelessness took hold.

On Sunday, he said that “it was a privilege to serve in that position” and referring to the new Minister for Housing, Fianna Fáil’s Darragh O’Brien, he said “he will have the best interests of all at heart”.

“Good progress has been made but there is much more to do,” Mr Murphy said.

Outgoing minister for education Joe McHugh has also lost out on a seat at the Cabinet table. Mr McHugh has been a prominent figure in recent weeks as he attempted to navigate the future direction of schooling in the midst of the Covid-19 pandemic.

In the new Cabinet there are six Fine Gael ministers, six Fianna Fáil ministers and three Green Party ministers. Fianna Fáil’s Dara Calleary is the Government chief whip and will sit at Cabinet.

Sources in Fianna Fáil expressed surprise that Mr Calleary had been overlooked for a full ministry and suggested that he may be assigned additional duties over the coming days.

There are also two super junior ministers: Hildegarde Naughten for Fine Gael and Pippa Hackett for the Green Party.

Many of those who lost out will be hoping for an appointment as a minister of state next week.

Among those in line for a promotion include Fianna Fáil TD Thomas Byrne who was involved in Government formation talks. He is expected to be given a role in European affairs.

Fianna Fáil, Fine Gael and the Greens intend to appoint 20 such junior ministers.

This would be the joint highest number on record, alongside the Fianna Fáil-Green Party government of 2007 led by Bertie Ahern.

The three parties intend to split the 20 posts on the basis of Fianna Fáil and Fine Gael getting eight ministers of state each, with the Green Party getting four.