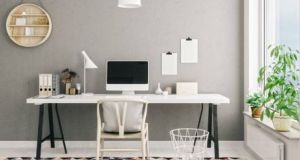 The ideal for many workers could be “blended working”, where people work a few days from home and a few in the workplace. Photograph: Getty Images

Almost two-thirds of workers say childcare is among their biggest concerns around returning to work, and almost half are worried about their mental wellbeing, a survey published on Monday warns.

Drawing on interviews with 350 workplace human resources managers, the survey finds 70 per cent of employers are open to facilitating working from home compared with just 10 per cent at the start of the year.

Over half the employers (51 per cent) said between 75 per cent and 100 per cent of their staff had been working from home during the pandemic.

Mary Connaughton, director of CIPD Ireland which conducted the survey, said the reopening of crèches from Monday would “relieve some of the childcare pinch-points” but would not solve the issues faced by parents of primary school children.

“Children up to the age of 12 cannot be left on their own. During the coronavirus crisis many parents had to take time off for childcare, taking both paid and unpaid leave, and we are conscious that it remains a worry as more employees return to the workplace.

“While the opening of crèches will help we are asking employers to consult with employees on their individual circumstances, and to be flexible in finding options that will meet the needs of both parents and the employer.”

This could include allowing workers start earlier or later than they usually would, or to work from home all or some of the time.

CIPD Ireland is a representative body for over 6,000 professionals in HR and career development across the State.

Ms Connaughton said when organisations were asked what issues were being raised by their staff, 65 per cent said workers had concerns around childcare; 45 per cent had raised physical and mental health issues around working from home; and, 36 per cent were worried around issues related to transport to and from work.

People were concerned about the safety of using public transport, and she expected there would be an increase in numbers cycling and driving to work.

“A safe commute is a new concept arising from this pandemic for employers, especially given enforced mask-wearing on public transport. CIPD Ireland advises businesses to take a considerate approach to this practice as it beds in, prioritise worker safety and keep discussing and monitoring what is and isn’t working for all sides.”

Welcoming the increased openness among employers to workers working from home, she hoped this could increase participation and inclusion in the workforce among cohorts like mothers, single-parents and people with disabilities.

However, she warned there was a “danger that working from home could become feminised” and seen as a lower-status form of working. “So that will have to be watched carefully.”

The ideal for many workers would be “blended working”, she said, where people could work a few days from home and a few in the workplace. This should be promoted for men and women.