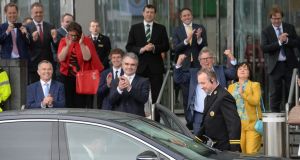 Every government faces challenges. However, the new alliance between Fine Gael, Fianna Fáil and the Greens, secured on Saturday in the Convention Centre in Dublin faces them at every turn.

There is “no question” about the most immediate challenge – the health risks posed by Covid-19, said Taoiseach Micheál Martin, just minutes after the Fianna Fáil leader had returned from Áras an Uachtaráin with his seal of office.

With the vast majority of the restrictions introduced to tackle the spread of Covid-19 being lifted on Monday, another phase to reopen the economy will follow on July 20th. So, too, will the risks of a second wave of coronavirus that reopening brings.

Decisions must also be taken on which countries to allow in-bound travel to Ireland without the need for a 14-day quarantine period – the so-called “air bridges”.

Then there will be the looming and fast-approaching recession once the State’s Covid-19 wage subsidies peel away, while a no-deal Brexit – in the background for months, but dangerously possible – edges ever closer, too.

The Government will establish a new, special Cabinet committee in the coming days under Martin’s leadership, as well as that of Tánaiste Leo Varadkar and Minister for Climate Action Eamon Ryan.

Warning the new Ministers that there is “no time for quietly settling in”, the Taoiseach said Government must have “an investment-led jobs and recovery initiative” to bring to the Dáil next month.

Equally, there will have to be actions to help children who have suffered from months away from classrooms: “We must help schoolchildren so that they do not fall permanently behind. We must help people to cope with the personal impact of stress and anxiety,” he said, adding that the Government must respond to the needs of communities and groups suffering “new and unexpected impacts” from the pandemic.

“We have to continue to implement safe and proportionate actions to limit the virus. The shaping of a fair and inclusive recovery will be our absolute priority from today and until this work is done.”

Varadkar, the new Minister for Enterprise, Trade and Employment, said the July jobs initiative will, as was flagged in the programme for government, be based on a “recovery fund”.

“It will spur domestic demand and employment, deliver balanced regional growth, boost SMEs, decarbonise the economy, and ensure Ireland is at the forefront of the digital future. All this, and lead to a more equal society.”

He also said that a national recovery plan, to be announced in the autumn around the time of the annual October budget, will set out a “long-term vision to restore full employment”.

“It will show how to secure public finances in a world that must live with Covid-19. The plan will also drive our efforts to decarbonise the economy and prepare for the next phases of technological transformation. We do not have any time to waste and must act now.”

The programme for government also said that a new Climate Action Bill will be enacted within the coalition’s first 100 days in office which, among other issues, will commit the State to net zero carbon emissions by 2050.

In his speech to the Dáil, Ryan did not address such specific climate action measures but spoke about the experiences of lifting the country out of previous recessions, such as in the 1980s.

The Dublin Bay South TD referenced the work of the National Economic and Social Council from that period, which he said invested in “community development and leadership”.

“Investing in communities was seen as a way of helping to eradicate poverty, and community leaders were built up. It was not all the work of the State. The State facilitated communities to come out of bad times, and it worked. We were good at that. We were seen as one of the best examples in Europe of how the Leader programme and community enterprise schemes could work.

“That community approach really worked and I think that, in every department of the Government, we should be looking to put a focus on community and encouraging a bottom up recovery. The State should not do everything for people but should facilitate community groups to thrive. We lost some of that orientation during the past decade and it is time to bring it back at scale and everywhere.”