New Department of Children to be responsible for Direct Provision 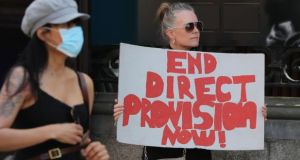 Protesters outside Leinster House in May call for the end of direct provision. Photograph: Nick Bradshaw

Responsibility for the Direct Provision system, which will be abolished by the end of the Government’s term, will transfer from the Department of Justice to the recast Department of Children.

Minister for Children, Disability, Equality and Integration Roderic O’Gorman of the Green Party will now take responsibility for the system.

It had previously been assumed that Direct Provision would remain within the auspices of the Department of Justice but Green Party leader Eamon Ryan, the Minister for Climate Action, Communication Networks and Transport, said it will be transferred.

The abolition of the Direct Provision system was one of the key goals of the Greens during the coalition negotiations and Mr O’Gorman, who was previously his party’s justice spokesman, is credited with pushing the issue.

The Programme for Government commits the new Fianna Fáil-Fine Gael-Green Party coalition to “ending the Direct Provision system and will replace it with a new International Protection accommodation policy, centred on a not for profit approach”.

The change will be made over the lifetime of the next Government and a white paper on the way forward for the international protection process will be drawn up by the end of the year. It will be informed by the current review into the system being carried out by Catherine Day.

Speaking on RTÉ’s Week in Politics, Mr Ryan said it will take the lifetime of the next Government to fulfil the pledge to abolish the system, and that will be a matter for Mr O’Gorman’s department.

“The justice department was actually a huge department, probably too big for any one minister,” Mr Ryan said. “So I think it has actually made sense to split a variety of functions within that and yes, in this new Department of Children, Disabilities, Equality and Integration: that is where it will reside.

“It will be challenging. It will be up to Roderic O’Gorman as the minister responsible to manage the change.

“He’s going to have a challenging job as every member of Cabinet is. That is one of the benefits of a Programme for Government is that this has been agreed. There is common purpose in this so it is a matter now of doing it. It will take time. It will take the full time of the Government.”

Mr Ryan said Irish people themselves “agree that the current system affects people’s mental health, “restricts their ability to integrate into this country if they are here to stay”. He also said the decision making around those seeking international protection will be speeded up.

“That all actually makes sense. I think there is broad agreement around it in the political system. It will not be easy to make the change but we are going to start and be consistent and steady and show leadership in doing that.”

The three parties also agreed a number of short term measures for Direct Provision system, such as extra resources to help speed up the application process and reducing the time asylum seekers must be in the country to be eligible to work from nine months to six months.

There will also be greater access to driver’s licences to asylum seekers, better training for management in Direct Provision centres, improved mental health services and better vulnerability assessments for those in the system.