Warren Crossan gunned down off Falls Road on Saturday afternoon 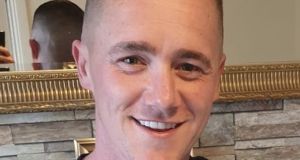 The PSNI detective leading the investigation into the murder of dissident republican Warren Crossan in west Belfast on Saturday has described the killing as “callous and reckless”. Photograph: PSNI/PA Wire

The PSNI detective leading the investigation into the murder of dissident republican Warren Crossan in west Belfast on Saturday has described the killing as “callous and reckless”.

Mr Crossan (28) was chased by two gunmen and then shot dead in St Katharine’s Road in West Belfast on Saturday afternoon. His father, Tommy Crossman, a member of the Continuity IRA was shot dead, also in west Belfast, just over six years ago.

Mr Crossan, who was previously questioned by PSNI detectives about the murder of Dublin criminal Robbie Lawlor in north Belfast in April, had travelled from his home in Crumlin, Co Antrim to his family home in Rodney Parade on Saturday.

“This was a callous and reckless killing. To bring firearms onto a residential street in broad daylight simply beggars belief,” he added on Sunday.

“The gunmen did not give any thought to the risk posed to local people in this community when they ran through the streets firing shots, at least one of which struck a vehicle owned by a resident,” he said.

The dead man had strong dissident republican connections and was believed to be heavily involved in drugs dealing. At the time of his murder he was on bail charged with the importing £180,000 worth of cocaine into Northern Ireland.

Just over six years ago his father, also a dissident republican, Tommy Crossan was murdered in a gun attack in west Belfast.

Tommy Crossan was involved in a split in the Continuity IRA where he was a senior Belfast commander.

Two of the main lines of inquiry for Warren Crossan’s murder, it is understood, relate, firstly, to a feud within dissident republicans and, secondly, to the murder in Ardoyne in north Belfast in April of well-know Dublin criminal, Robbie Lawlor.

Mr Lawlor was suspected of ordering the murder and dismembering of 17-year- old Keane Mulready-Woods in Drogheda earlier this year.

There was speculation over the weekend that Mr Crossman’s killing may have been in revenge for the murder of Robbie Lawler.

The PSNI said it has not ruled out organised crime links to Warren Crossan’s killing. The senior investigating officer, Detective Chief Inspector McCartney however said it was “too early to speculate on the motive for this callous murder”.

The area where Mr Crossan was murdered was busy with pedestrians and motorists on Saturday. Detective Chief Inspector McCartney appealed to anyone with information to bring it forward to the police.

The Sinn Féin MP for West Belfast Paul Maskey said the killers had “absolutely no place in our community”, while adding, “They must cease their anti-community activities and get off the back of the people of west Belfast.”

Belfast SDLP councillor Brian Heading said those responsible for the “barbaric crime” had no local support. “They need to be caught and brought to justice. I would encourage anyone with information to bring it to the police as soon as possible,” he said.