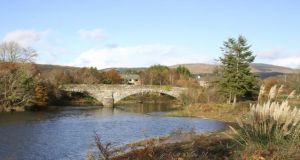 A view of the Roughty river. File photograph: Kenmare.ie

A woman in her 30s from Co Cork has died after getting into difficulty while kayaking with a group of friends in Co Kerry on Sunday afternoon.

The woman was one of five kayakers, including her partner, who set off from near Loo Bridge to make their way down the Roughty river.

The other four members of the group, all men, had gone ahead, only to discover that she had fallen behind.

When they retraced their route to locate her they found her trapped under a tree in a rocky gorge.

They managed to get to the woman and keep her head above water for a period but it’s understood that they were unable to get her to safety and she drowned.

The men raised the alarm over the incident, which happened at about 12.15pm, and units of the Kerry Fire and Rescue Service from Kenmare, Kerry Mountain Rescue Team and the Irish Coast Guard assisted in the recovery of the woman.

A local doctor pronounced the woman dead at the scene at about 1.50pm and her body was removed to University Hospital Kerry in Tralee for a postmortem examination, which is due to take place on Monday morning.

A Garda spokesman described the woman’s death as “a tragic accident” and said that gardaí will now set about preparing a file on the incident for an inquest in the South Kerry Coroner’s Court.

The Roughty, which flows from Clonkeen north of the Cork-Killarney road in a southwesterly direction through to Kenmare, where it enters the sea, is a popular river with kayakers.