More than 100 people attend launch of ‘Truly Frank’ in Dublin 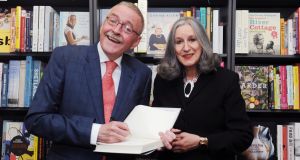 A book by former Irish Times environment editor Frank McDonald was described as “a memoir not just of a fascinating life, but of a fascinating city” by historian Catríona Crowe at its launch in Dublin last night.

More than 100 people gathered in Hodges Figgis book shop in Dublin for what Ms Crowe described as a “momentous occasion”.

Truly Frank tells the stories behind McDonald’s public advocacy for a more beautiful city, as well as his battles with politicians and developers. It also describes growing up gay in Dublin when homosexuality was entirely hidden.

“In the book there’s a photo of Frank as a baby in his pram in the back garden of his home on Glenmore Road in Cabra, and that baby has a sceptical expression on his face,” Ms Crowe said.

“That’s an expression known to all of us here over ensuing decades. Before he could speak, he was questioning the bona fides of those who were addressing him, which is a very fine start for a dogged investigative journalist.”

McDonald told the crowd he was anxious about how the book will be received. “I’m putting myself out there in a way that I’ve never done before and I feel quite vulnerable about that,” he said.

“I haven’t set out to be malicious in any way. I’m not settling scores with anybody. I’ve just told it like it was, or at least how it seemed to me.”