If we want a healthier Dublin, we need to start in Wicklow

Capital Ideas: The health of Dublin depends on the natural world the city is built on 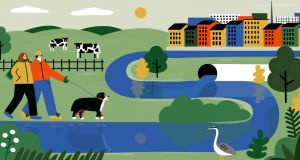 “In Wildness,” the early American environmentalist Henry David Thoreau wrote, “lies the preservation of the World”. It’s unfortunate that this sentence, torn from its rich context in his essay Walking, has become a slogan for “wilderness”, for an idea of nature divorced from human civilisation.

We cannot, then, “fix” Dublin in isolation from its hinterland. But it’s not easy to see this. We live in houses and work in offices and factories that shield us from sun, rain and wind; we buy food so processed and wrapped that its natural origins become invisible; when we flush our toilets or drive our cars we cannot see the impacts our everyday actions have on the environment.

And at a more subtle level, we are learning that our extreme alienation from the natural world carries a high price in physical and mental health. We are beginning to wake up to the connection between city and countryside, between the wild and our world.

So what can Dubliners do, acting locally, to create a healthier, more sustainable city, a natural capital?

A useful first step might a simple one: just go down to your local riverside, whether that happens to be the Liffey, the Dodder, the Tolka, or any of their tributaries, however small.

Rivers are powerful and tangible reminders that everything in our world is connected to everything else. Much of what we do, from the bathroom to the boardroom, ends up in a river; water quality is a good indicator of the general environmental quality of the catchment area it drains. And rivers are, as Mark Boyden of the innovative Streamscapes organisation has shown, places that unite and engage different sections of communities in problem-solving.

James Joyce captured something of Dublin’s web of natural linkages through his evocation of the Liffey in the opening line of Finnegans Wake: “riverrun, past Eve and Adam’s, from swerve of shore to bend of bay, brings us by. . . recirculation back to Howth Castle and Environs”.

But the river’s connections stretch even further than Joyce chose to imagine. The state of the Liffey at O’Connell Bridge depends on the state of the Wicklow uplands, and of all of the land and villages and towns along and above its banks as it flows down, through three counties and 120km before reaching the city.

The high bogs where the river originates are degraded by over-grazing, drainage and uncontrolled burning. Its banks are often unstable and prone to erosion through removal of the riverside trees that used to protect them. The river suffers directly from varying degrees of agricultural, industrial and domestic effluents en route – and of course within the city itself. Three ESB dams, and massive abstraction of water, have drastically altered its flows and volume. Wetlands, which historically acted as natural sponges that could absorb heavy flows, have often been drained or paved over, leaving us more and more vulnerable to flooding.

The degradation and depopulation of our uplands has created a silent social and environmental tragedy, that affects the city. It would help bridge our notorious urban-rural divide if the capital invested in assisting Wicklow Uplands Council to restore this resource. Rewetting the bogs, controlling fires, and planting native broadleaf woodlands and restoring or even creating wetlands at appropriate points would bring the city multiple benefits.

It would reduce downstream flooding, deter erosion and siltation, help sequester carbon and mitigate climate change. Wild flowers could flourish again in all these habitats, sustaining the beleaguered bees whose pollination is crucial to our agriculture. It would provide beneficial, beautiful and biodiverse places for urban dwellers enjoy recreation. Managing the river catchment holistically, from skyline to sea, is essential to improving the well-being of city and country dwellers alike.

This might sound like a soft-headed environmentalist’s impractical fantasy. But just such a “‘whole watershed approach” has informed the policies of several hard-headed city councils, perhaps most notably New York. When water treatment plants in the Big Apple began to fail in the 1990s, the authorities made a remarkable decision.

Instead of paying billions for new plants, they decided to invest less, but still substantially, in a landmark “natural capital” project in the Catskill and Adirondack mountains, the source of the city’s water supply.

They paid the farmers, landowners and businesses upstream to reduce effluents and restore woodlands and wetlands as natural filters, so that very little treatment was needed when the water reached the city. Meanwhile the uplands were enhanced for local people, and drew more urban tourists.

The river catchment is just one natural strand in the rich weave of natural and social connections that underpin Dublin city. The sea is another one. But the river catchment links the centre to the whole periphery of the city, and there is already an institution equipped to enhance and strengthen it. This is the Local Authorities Water and Communities Office, set up under the far-seeing EU Water Framework Directive. But it needs a lot more funding, and a lot more political impetus.

As citizens, maybe it is up to us to gather at the river, and see it gets the resources it needs.

Localised pollution by individuals is a major issue that must be addressed. To assist with the “health of the Liffey”, education programmes should promote awareness and appreciation of large and small rivers and waterways.

The Environmental Protection Agency (EPA) has an important role to play: approximately one third of our major rivers and their more important tributaries are surveyed and assessed each year by its ecologists.

Dubliners have fantastic amenities with the coast, the mountains and the rivers which flow from them. Investing to protect this makes sense and not just because it is a “nice” thing to do. Tens of millions, rather than hundreds, could achieve a lot. The gains are hard to quantify, but if it reduces flooding and has biodiversity benefits, a case could be made.

This idea focuses on the hidden environment that impacts the Liffey at the heart of the capital. We are gradually taking pollution more seriously but there is a distance to go. There is not much the city can do about this without the support and focus of the EPA.